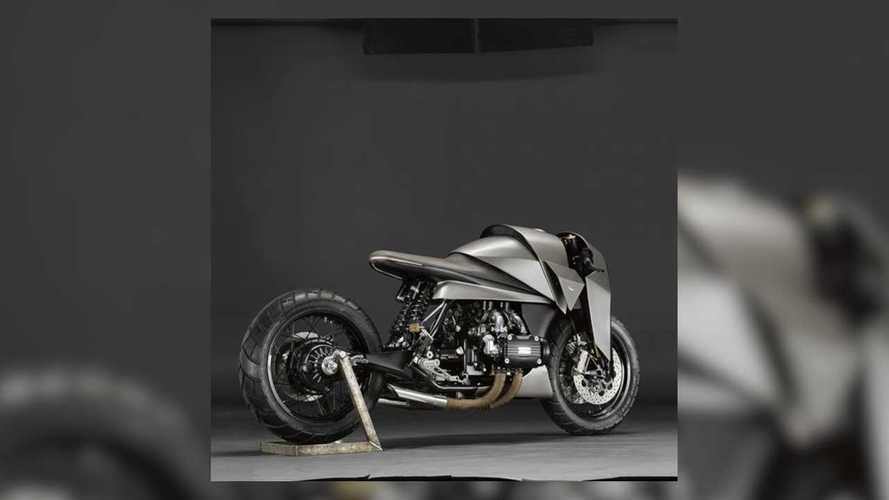 Just guess what it started life as.

When you think about otherworldly, futuristic machines, the Honda Gold Wing probably isn’t the first bike that comes to mind. That might even go double if we’re talking about a 1977 Gold Wing. If that’s the case for you, don’t worry—James Hilton, founder of Death Machines of London, has enough astounding vision for all of us put together.

We, Too, Come From The Future:

The result is a project called Kenzo, and there’s truly nothing else like it in the world. DMOL drew inspiration from samurai armor for its look. They used CAD to create the design, but found that utilizing so many different manufacturing processes—including CNC work and 3D printing for certain bits and pieces—added extra challenges.

One build of this bike was completed and shown at the Bike Shed London 2018, but DMOL wasn’t satisfied, and so took it back home to rework it. When some parts are done by hand and some parts are done by machine, the resulting finished look doesn’t always flow together as perfectly as you might like. That’s the nature of art, though—you have a vision in your head, and you’ll do whatever you need to do to achieve it, even if it means burning the whole thing down and starting over.

The end result may have started life as a humble 1977 Honda Gold Wing—like the many other Gold Wings produced that year and going forward. The 1000cc flat four engine was refreshed, but according to Hilton, all they really changed was tuning the carbs to work better with the DMOL Slash Cut mufflers. Everything else done to the engine was purely cosmetic.

Ultimately, whatever anyone else writes about this build pales in comparison to what Hilton himself has written over at Silodrome. He takes you deep inside the thought processes and details of this build like no one else possibly could—with a ton of gorgeous photographs to match. That’s handy, as Kenzo is also currently for sale, if you’re in the market. Do yourself a favor and go check that piece out.