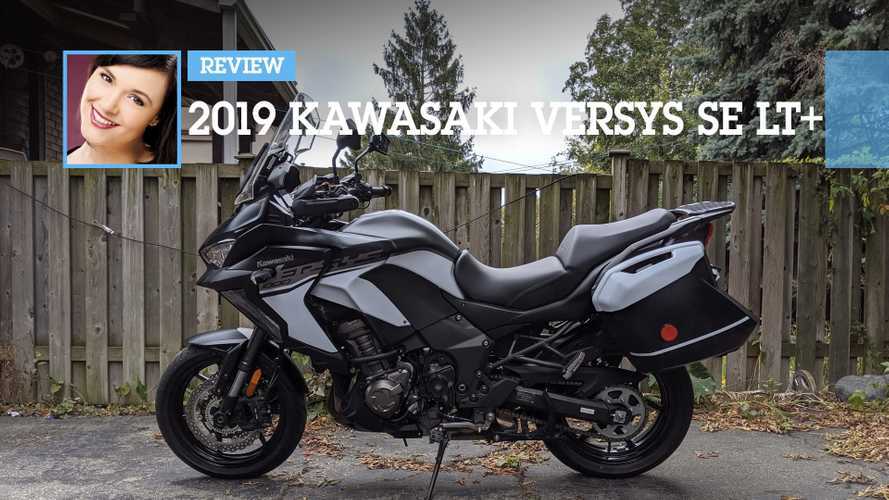 Living 400 miles from home means regular road trips back to one's home province for some long overdue family time. While in my experience packing a a car and hitting the road is so much easier, I also greatly enjoy doing the trip on a motorcycle when I get the chance. It changes things up and makes the dullest highway in Canada a little less dull.

I’ve had the opportunity to do the 800-mile stretch to and from Montreal on some pretty sweet rides including a Honda Africa Twin, a Yamaha Super Ténéré, and, more recently, on a Zero SR/F.  With the riding season slowly creeping to an end, I decided to journey to Quebec on two wheels one last time in late September. All I had to decide is what bike to book for the ride. With my own Honda still in pieces in a friend’s garage waiting for some much-needed love, I turned to Kawasaki.

See, I had the chance last year to do a road trip on the Ninja 1000 and discovered it to be a really decent tourer. With the introduction in 2019 of the new Versys 1000 SE LT+ trim level, it made me curious to find out how the Ninja 1000’s actual touring counterpart would compare. Kawasaki was kind enough to hook me up last minute with a bright white Versys and to allow me to put the considerable mileage on it. Off I was for my last ride of the 2019 season.

The Versys 1000 SE LT+ is Kawasaki's new sport-touring flagship for 2019. The model was shown for the first time at EICMA in 2018, introduced with a flock of new techs that include ECU-managed throttle, cruise control, and smartphone compatibility via the Rideology app.

Also new this year on the LT+ is a new electronic suspension control. The Kawasaki Electronic Suspension Control (KECS)offers three possible settings: single rider, single rider with luggage, and rider with passenger and luggage. It’s pretty cool to watch the system buzz into action.  As you navigate between suspension settings, you get to watch the system adjust the height of the BFRC gas-charged shock as you go, lifting the tail of the bike and lowering it down. I had plenty of fun demonstrating the system to my entourage. What can I say, I’m easily entertained.

When I picked the bike up, the Kawasaki rep also showed me how to use the Rideology app works and how it allows the rider to change the riding mode from a distance. The modes Sport, Road, Rain, and Rider (custom) Note that the modifications to the settings will only take place once the bike is shut down and restarted again.

The bike came equipped with a convenient set of 28-liter (7.4 gallons) side cases which was more than enough to pack rain gear, snacks, and weekend necessities. If you don’t wish to purchase the optional luggage, there are enough anchoring points at the back to secure a bag on the pillion using Rok straps or bungee cords.

Considering the bike’s mission within the lineup, comfort is usually expected but interpretations of comfort greatly vary from one company to the other. Thankfully, Kawasaki’s definition of comfort matches mine. The model’s ergos haven’t changed for 2019 and I don’t blame Kawasaki—the company doesn’t need to change a good recipe.

Compared to other bikes I’ve had the pleasure to travel on, the Versys ranks among the more comfortable one. The bike offers a relaxed riding geometry. The pegs are located low on the body so that the legs are almost at a 90-degree angle. The saddle’s profile is optimized for comfort with a wide-enough surface towards the back to receive the bottom and with just the right dip towards and narrowness at the front to clear the thighs.

The 1,043cc, inline-four is similar to the Ninja’s (in shape and size but with a slightly lower compression ratio) so initially, I expected, well, a similar level of performance. After a few days, however, I was left a bit disappointed. The Versys seemed to lack the gut I expected it to have. Turns out, the engine needs its premium gas to run at optimal capacity and it looks as though the last drink the bike received before I took over might have been of a lower grade fuel. After two top-offs of premium, the Versys livened up and became spunkier.

As it’s normally the case with a Kawasaki inline-four, the throttle delivers smooth and gradual power, minus the little extra kick the Ninja has. That being said, the sport-tourer didn’t lack gut and gave me plenty of power to work with and to comfortably reach and maintain highway speeds without sounding like the bike’s about to fall apart.

Between the three suspension settings and four riding modes, you’d be hard-pressed not to find a combination that suits your riding style. The Versys willingly dips in the bends and is quite sure-footed in doing so. Its behavior is tamed and predictable—it’s a Ninja on a leash. I picture the Ninja as the devil on my shoulder and the Versys, as the angel.

In addition to swaying with ease, the bike offers one of the best and worst feature: it measures your maximum lean angle on both sides. It’s good because I never knew I wanted to get that information until it was given to me. It’s bad because it made me want to best myself. I was able to reach a 29° lean angle on the left if I remember correctly. In comparison, MotoGP racer Marc Marquez achieved a jaw-dropping 70° angle during a practice session. I get the message.

Beyond the leaning challenges and the watered-down performance, there’s one thing the Versys accomplishes impeccably: fuel economy. I managed to achieve an average of close to 50 mpg. Of course, 95-percent of that number came from cruising on the highway but I wasn’t hypermiling and considering that’s what the Versys is designed to do, I’d say this is a stellar performance. I only needed to fill up the bike three times during the trip, two of which were because I needed the break more than the bike needed the gas.

One thing that plays against the Versys is its weight—something had to give. Fully-loaded like the one I got to ride on, the bike tips the scales at close to 590 lb which is hefty for the segment. That being said, the weight is well distributed and while it’s far from feeling like a lightweight, it’s also pretty easy to maneuver. Maneuvering was also made easy by the seat height set at 33.1 inches which is a perfect height for me and ensures I have a secure footing on both sides. It definitely helped make the bike easy to push around when I needed to.

The addition of all the premium features and new techs elevates the Versys—it also elevates its price. The 2019 SE LT+ is priced at $17,999 which is a steep premium over some of its competitors and even over its predecessor. For comparison, the former Suzuki V-Strom 1000 is priced at $12,999 and the Yamaha Tracer 900 starts at $10,999. The thing is, the Versys doesn’t quite play in the same league anymore.

It’s now closer to its European counterparts like the BMW R 1250 GS and the Ducati Multistrada 1260—not quite the same league either, if only for the difference in displacement and engines. The Versys is now positioned between the above the entry-level and just below the top-shelf, as a sort of middle-ground offered at a middle-ground price. You know what, that works for me.