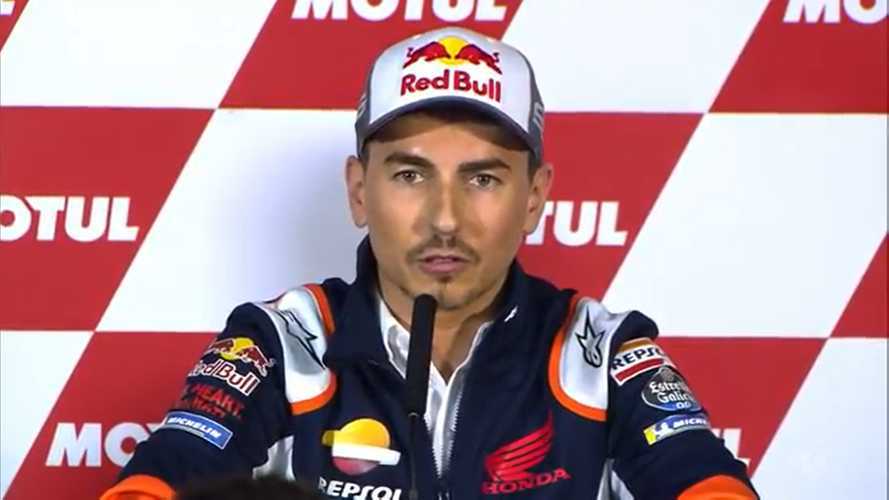 After a difficult 2019 MotoGP season, five-time world champion Jorge Lorenzo finally announced his retirement from racing. Rumors about the possibility had been floating around for some time, but Lorenzo called an official press conference on November 14, 2019 along with Dorna CEO Carmelo Ezpeleta to announce his news to the world.

Thanks For The Memories:

Lorenzo’s retirement, he said, will be effective directly following the final race weekend of the 2019 MotoGP season at Valencia.

“I always thought there are four significant days in the career of a rider. Your first race, your first win, your first championship, and then the day you retire,” Lorenzo said.

“Well, as you may imagine, I’m here to tell you this day has arrived for me. I want to announce this will be my last race in MotoGP, and that at the end of this race I will retire from professional racing,” he continued.

Lorenzo then went on to describe how an injury-plagued 2019 season, when taken on top of a bike he was already having trouble getting to grips with, began to make him see that it might be time to hang it up.

“You know, I love this sport, I love to ride, but above all things, I love to win. I understood that if I’m not able to fight for something big, to fight for the title or at least to fight for victories, I cannot find the motivation to keep going, especially at this stage of my career,” Lorenzo explained.

He then went on to say that Honda had treated him very well, and he was sorry to have disappointed them, but that he felt that both he and Honda could not be there to only score a few points. After thanking everyone who had participated in his career—including his mother, for bringing him into this world so he could race in the first place—the event aired a highlights reel from Lorenzo’s career.

Going into the 2019 Valencia season finale, so far Fabio Quatararo is fastest in practice on day one, followed by Maverick Viñales, with Lorenzo’s teammate Marc Márquez in third. As for Lorenzo, he was sixteenth fastest in practice session one, just two places behind Valentino Rossi. How will Lorenzo’s final race unfold? Probably not much differently from the rest of 2019, but we’ll have to wait and see for sure.