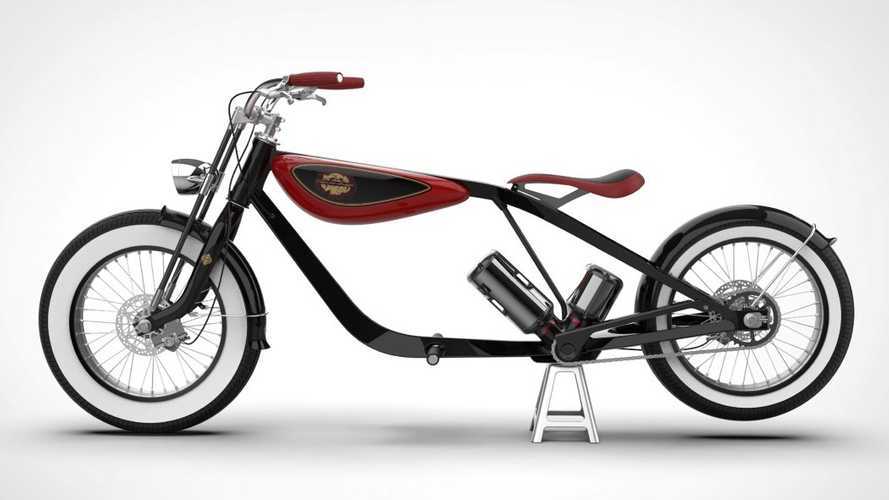 If Harley made a brunch-hopping beach cruiser...

Like it or not, Harley-Davidson represents motorcycling’s past. Despite the company’s efforts to contemporize with the introduction of the LiveWire, classic design remains the brand’s bread and butter. On the other hand, e-motorcycles untether designers from the engineering restrictions of previous generations. Apparently, Vietnam-based Carota Design didn’t get the memo as its Classic E-bike concept leans more on Harley-Davidsons of the past than e-moto designs of the future.

While Carota’s e-bike drew from numerous sources, Harley board track racers of the 1910s and 1920s immediately come to mind. The faux girder fork, whitewall tires, and solo leather saddle call back to the F-head models. Carota also applied an underslung fuel/battery tank that maintains the line of the frame’s backbone and mimics Harley’s 9E.

Though the Motor Company’s influence on Carota’s concept is obvious, the design firm relegated the v-twin electric motor to the rear of the chassis. Yes, it may have made engineering sense, but that’s a cardinal sin in Harley-Davidson’s book—both engine placement and engineering. Everyone knows that the V-twin is the crown jewel of any hog and Carota’s sacrilegious decision leaves the concept disproportioned and hollow.

While Harley has relied on antiquated machines for decades now, they’ve consistently produced proportionate designs that epitomized the classic motorcycle silhouette—except that weird V-Rod thing. Carota’s Classic E-bike only emphasized the empty space by stretching the frame to resemble a lowrider bicycle. Pair that with a set of mid-rise handlebars and some strut-mounted fenders and you end up with a beach cruiser for the coolest of dads (no dads are cool).

“Think about it as an alternate future where the V-twin power train never really took off,” said the team at Carota. “It would replace a bike in your daily commute in the city or simply to impress your friends at a Sunday brunch gathering”

Sunday brunch? Something tells me the team at Carota has never felt freedom flow through their fringe on an all-American hog. Whether it’s Harley modernizing, electric bikes going old-fashioned, or dads brunching, we hope everyone finds their way safely—even if it ain’t so pretty.