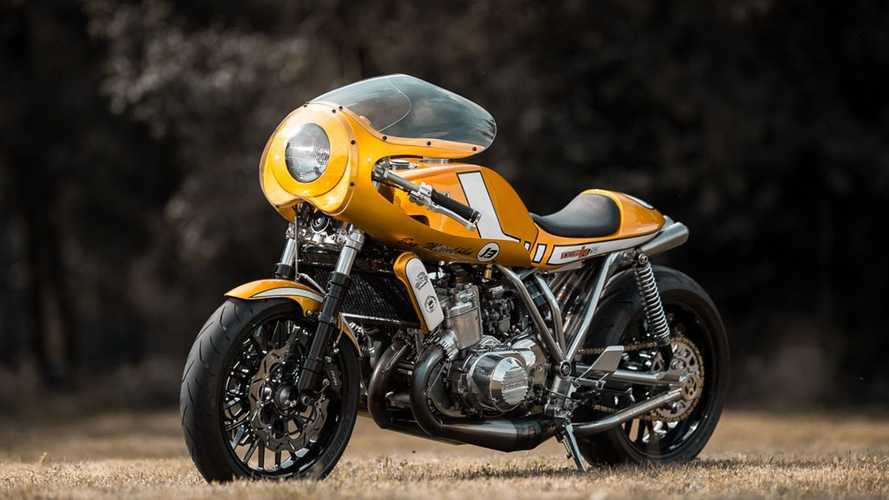 In 1971, Suzuki released the first Japanese motorcycle with a liquid-cooled engine in the GT750. The water-cooled, three-cylinder, two-stroke earned endearing nicknames like Water Buffalo in the States and Kettle in the UK (clever Brits). While the landmark engine produced exceptional power for the time, the handling of the GT750, to put it lightly, left room for improvement.

The owner of the Egli Water Buffalo, Boy Meinkehn, got the drop on the unique Suzuki from a friend in the Netherlands. Recognizing the oil-in-frame design and distinct welds, Meinkehn speculated that his new race bike could consist of a legendary Egli frame. To confirm his highest hopes, Meinkehn phoned Egli’s Swizz firm but no one recalled a frame for the GT750. To Meinkehn’s delight, a few days later Egli emailed him directly verifying the authenticity of Meinkehn’s find.

With a validated Suzuki Egli specimen in his garage, Meinkehn knew that he couldn’t just use the GT750 as a race bike so he brought it to Freiberg-based Extremebikes. While Meinkehn wasn’t planning on tracking this particular Water Buffalo, he still wanted something performance-oriented. With that in mind, Extremebikes set out to capture the racing-heritage of the model while also creating a bike that could win any custom bike show.

Leaving the Egli frame and iconic engine intact, Extremebikes immediately updated the suspension by fitting a Honda CBR 900 front end and a Kawasaki ZRX1200 swingarm to the rig. Next, the team attached a set of PVM wheels and the build’s skeleton was ready for some bodywork.

To achieve the cafe racer style, the builders replaced the bloated tank with a streamlined tank and tail section combo. The swoop of the Avon fairing integrates seamlessly with the line of the tank and seat. With LSL clip-ons, Extremebikes ticks all the cafe racer boxes before moving on to the engine.

When the builders removed the water-cooled triple, they immediately noticed the machined ports and balanced crankshaft. After replacing the base gasket and refurbishing the previously modded motor, the two-stoke was ready to ring back to life. However, the team needed a bespoke exhaust for the build so they enlisted the help of two ex-two-stroke racers to design the system.

With all the fabrication complete, Extremebikes knew they had to do something special for the livery. To celebrate the heritage of the Water Buffalo, the custom shop decided to coat the build in an original Suzuki GT color. The saturated gold paint commands attention and the word from placed between the 1 and 3 of the racing number cleverly calls back to the rarity of the frame. Extremebikes’ rendition of the GT750 is something that lives up to the Water Buffalo lore and Egli name.

Source: Return Of The Cafe Racers
++1