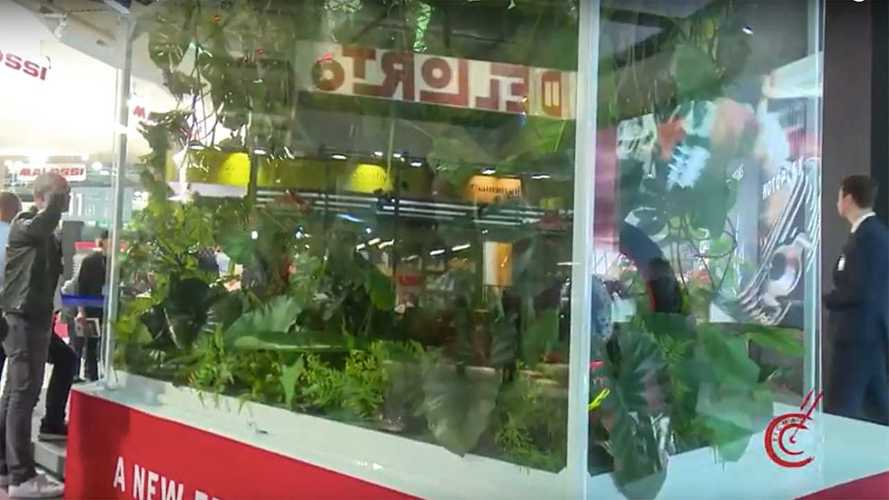 There’s been a lot to unpack from EICMA over the past week. The tricky part about being a few thousand miles away from the event is that there’s a lot happening on the floor that we’re missing out on. The atmosphere, the smaller companies that don’t send out press released, and sneak peeks at models companies are not ready to advertise yet. It’s the case with Aprilia. Between the RS 660 and Tuono 660 Concept smoke shows, it wasn’t hard to overlook the glass box filled with tropical leaves that shared the stage—especially if you weren’t there in person. Thankfully, some keen eyes on the ground spotted said box and while pretty to look at, its content is actually a clue pointing to a new Aprilia model.

Based on the mysterious glass box on display at the Aprilia booth, rumors about what the Italian firm is teasing flared up. All we really get to see is a rear knobby tire mounted on a wire-spoke wheel and an upswept exhaust tip. That’s enough for everyone to agree that it looks like the Aprilia Tuareg could be about to make a triumphant comeback. It’s also suggested that the returning Tuareg could be underlined by Aprilia’s new 660 engine—the one introduced in the RS and showcased in the Tuono concept.

A closer look at the wheel and swingarm.

The model was offered with different displacement options during the 80s and 90s, at the peak of the Paris-Dakar rally’s popularity. Considering the boom the midrange adventure segment is undergoing, this is a really clever move on the part of the brand that lacks a bit in the multipurpose department. The closest thing Aprilia currently has to an enduro slash adventure bike at the moment is the Dorsoduro, which is a motard-type bike.

Rumors about the Tuareg aren’t entirely new. Already in August, some people suggested that an Aprilia adventure bike was in the works and that it would use the then also rumored 660 mill—the one officially unveiled in the RS. Italian graphic designer Oberdan Bezzi even gave the modern-day Tuareg a face in a render he published during the summer. Of course, the drawing is his personal interpretation of the bike and Aprilia probably has a plan of its own for its new model.

Should it become reality, the model could be launched as early as next year as a 2021 model. I’m super ready for it.

Here’s the video the EICMA team did of the Aprilia booth showing the glass box. What do you think?