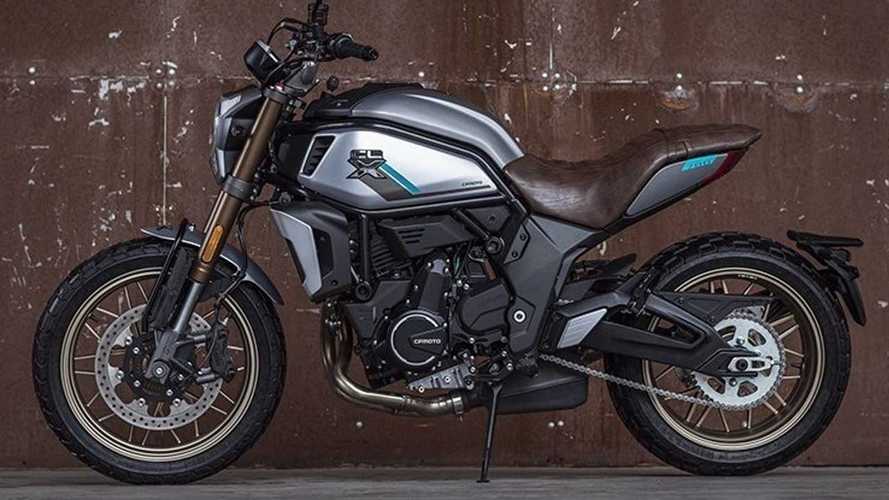 Austria by way of China.

In August 2019, we reported that China-based CFMoto could release a streetfighter based around KTM’s 790 engine. At EICMA 2019, CFMoto confirmed our suspicions by unveiling the 700CL-X.

Though the 700CL-X employs the 790 Duke’s LC8c engine, CFMoto reported that the model produces 74 horsepower and 49 ft-lb of torque. That’s certainly reduced from the 105 horsepower and 64 ft-lb of torque generated by the 790 Duke, but the Chinese brand doesn’t need to prop up the racing pedigree as KTM. Leveraging the same motor, the company plans to release three variants of the middleweight motorcycle.

The CL-X Adventure touts spoked wheels, a tall windscreen, soft luggage, and moto-style bars while the CL-X Heritage sports the obligatory brushed metal finish, vintage leather seat, and cast wheels that resemble spoked rims. The styling of the CL-X Sport aligns most with the streetfighter concept, but CFMoto adds clip-ons, bar-end mirrors, and rear-set pegs. Regardless of the variant, the 700CL-X will come standard with cruise control, ABS, and a Bluetooth-enabled LCD display.

With the distinct styling of the three versions, it’s easy to see that CFMoto is targeting the Scrambler and R Nine-T crowd. Similar to those platforms, the 700CL-X lends itself to a modular system and allows the company to cater to the differing tastes of consumers. Along with the styling, promotional materials for the 700CL-X point to the hip image that Ducati and BMW have fostered for their respective models.

The joint development and production venture between the Austrian and Chinese manufacturers dates back to 2014 and the relationship looks stronger than ever with the introduction of the 700CL-X platform. While we're unsure if the 700CL-X will make it to the US, we can’t wait to see what both brands cook up next. If the 700CL-X is a hint of things to come, we think this is just the beginning of a beautiful friendship.