Husqvarna Returns To Moto3, Is Clearly Not OK 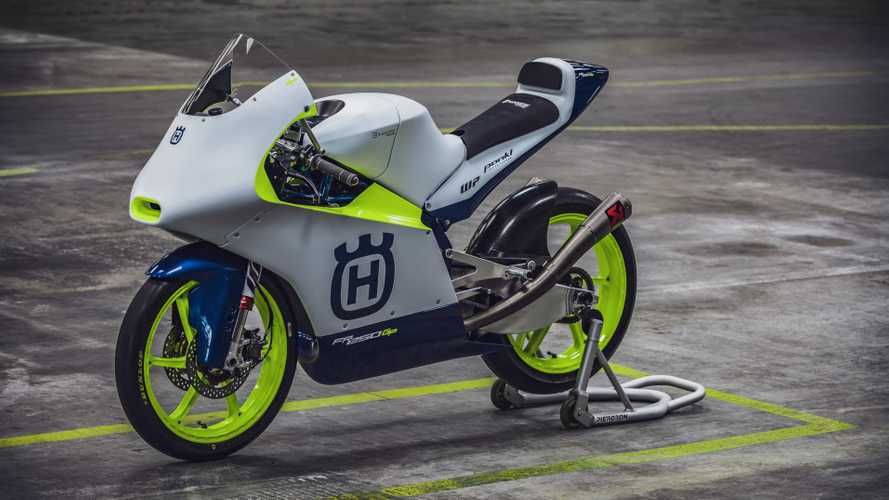 EICMA isn’t just a time for new bikes, It’s also a time for racing team announcements. What better place, then, for Husqvarna to formally announce its return to the Moto3 series for the 2020 season? Rumors had of course been swirling about it for some time—but now, at last, we have confirmation.

Max Racing Team, owned by none other than four-time 250cc World Championship winner Max Biaggi, will be using Husqvarna FR 250 GP bikes to contest the 2020 Moto3 series, with the full weight of the Husqvarna factory behind them. The season officially kicks off in Qatar on March 8, 2020.

Of course, you can’t have a race team without racers. Team owner Max Biaggi said, “Our two riders are both very motivated. With Romano Fenati and Alonso Lopez, we have one experienced and one young rider, but both can deliver strong results.” For various values of ‘strong,’ I suppose, in Fenati’s case.

He continued, “We will give our riders all we can to allow them to show their true potential.”

Wait, wait, wait. Hold the phone. Sure, Fenati brings experience, and he’s in the somewhat unique situation of having a lot more experience than most Moto3 racers. After all, most in that series move on to other series and don’t come back. Fenati is the great exception, after that unforgettably terrible incident where he grabbed rival racer Stefano Manzi’s brake lever in a Moto2 race at Misano in 2018.

Punishment for such reprehensible racing behavior was swift, decisive, and seemingly fair. Fenati was unceremoniously cut from his team and his impending contract with MV Agusta was terminated. Then, his FIM racing license was withdrawn for the remainder of the season. It seemed like his career was over, and he had only himself to blame.

That wasn’t where Fenati’s racing career ended, however. For 2019, his old team—the Marinelli Snipers, for which he’d been racing when he had that unforgivable and recklessly dangerous incident with Manzi—inexplicably hired him back, this time to race for their Moto3 effort. At the time this move was announced, Marinelli Snipers tech chief Mirko Cecchini told Autosport, "It's like he would like to start from zero. This is a new life for him, and OK, he did a mistake, a big mistake, but I think that the media have made it bigger than what he was deserving.”

I’m not a professional racer, and I haven’t worked on a professional racing team. I’ve just watched racing for a long time. There are always racing incidents, and there will always be people bickering about whether one racer or another’s behavior was terrible. You know what doesn’t happen, though? Racers reaching out to grab other racer’s brake levers on track, while racing in anger. I love a good redemption story as much as anyone, but the racer who does that doesn’t belong on any track with other racers.

Recall: More Indian Scout And Scout Bobber With Brake Issues
This Is How MotoGP Racing Should Be
5 Cool Things To Know About The Kawasaki GPZ900R, The Top Gun Bike
Weekend WTF: Thousands Swamp Sturgis Like It's 2019 And It's Bad
The 5 Best Touring Motorcycles

Recall: More Indian Scout And Scout Bobber With Brake Issues
This Is How MotoGP Racing Should Be
5 Cool Things To Know About The Kawasaki GPZ900R, The Top Gun Bike
Weekend WTF: Thousands Swamp Sturgis Like It's 2019 And It's Bad
The 5 Best Touring Motorcycles
Commenting Guidelines