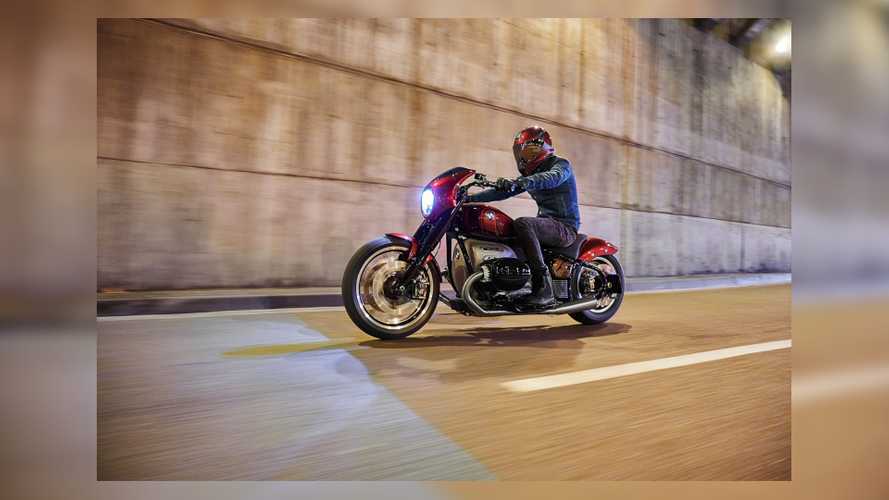 This Big Boxer came to play.

Not content to merely bring the expected production version of the 2020 BMW R18 cruiser to its presentation, BMW also unveiled its brand-new cruiser concept, the R18 /2. With swooping, modern, flowing lines, the intent behind this bike was to offer a ‘bookend,’ according to BMW head Markus Schramm.

The concept, shown in a stunning Candy Red Metallic, is BMW’s performance cruiser concept. Utilizing the same 1800cc boxer engine featured in the R18, the design brief aimed for a 1960s aesthetic, according to BMW. The 19” front wheel and 16” rear wheel are both made of cast iron, and stop with Brembo brake calipers.

Above all, BMW wanted to showcase how much customization is possible with its Big Boxer cruiser line. The best way to start unleashing customer imaginations, the company decided, was to introduce two such radically different takes to the public.

“The Concept R 18 /2 is uniquely extrovert. Elements from the past and future of BMW Motorrad merge here to create a captivating cruiser, making a powerful statement. It's a highly emotional bike designed for active riding. At the same time, the Concept R 18 /2 reflects the range of characterisations and customer dreams that we are able to realise using the same backbone,”

This particular interpretation of BMW’s big boxer feels straight out of Batman: The Animated Series to me, and I am 100 percent here for it. How closely will the production version of the R18 /2 resemble this gorgeous concept? If it’s at all like the first Concept R 18, the production version will likely look fairly similar. I’m always up for more two-wheeled beauty on our roads; what about you?