Would A Ducati Hairdryer Blow You Away? 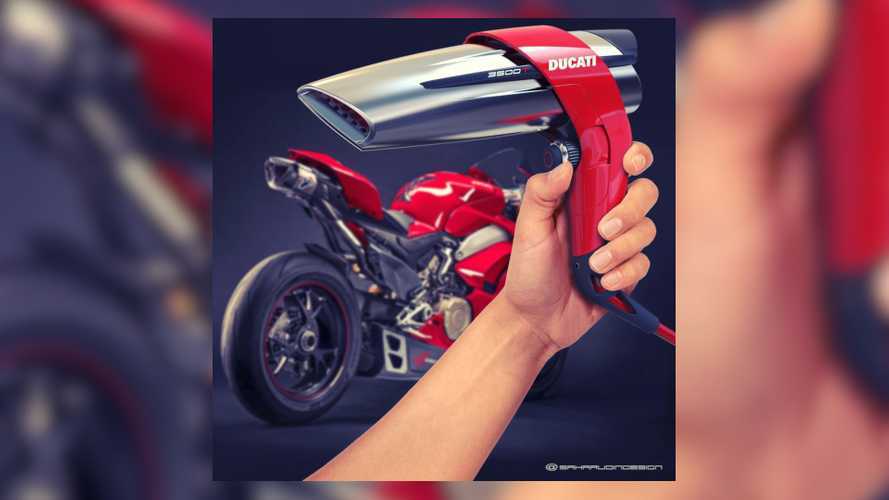 This concept does look the part.

On the kind of crisp, cold day where you can see your breath in the air, there’s nothing like a well-placed, toasty exhaust pipe. You don’t want it so close to any part of your body that it’s burning, of course. Still, if the toastiness is just right, a warm saddle is an undeniably nice thing on a chilly morning. Obviously, you could simply hook up some heated gear for those days, but there’s a certain charm in existing (if unintended) features in a bike’s design.

Then there’s creative extrapolation, which is where industrial designers like Saharudin Busri come into play. You might recall Busri’s lightcycle-esque design for a Dyson electric motorcycle concept, which Dustin recently wrote about.

Like many of us who love bikes (and cars), Busri loves to ask ‘what if…?’ questions. The difference between him and us is that he has the skills and talent to mock up designs to back up his visions. In this case, he asked what a Ducati hairdryer would look like—and then drew up a very convincing answer.

Sticking your head in front of any tailpipe, no matter how beautiful it is, would probably hurt your eardrums at the very least. While hairdryers can certainly be loud, presumably they’re not quite as bad news for your hearing—and besides, an actual Ducati exhaust wouldn’t be a very effective hair dryer.

So instead, you have this piece of Ducati-inspired household industrial design. Why not? It’s a logical extension of people turning other mechanical bits into functional sculptures. Think about AutoArt and anyone else who’s made an entire niche out of those beautiful brake disc clocks. That’s exactly the same person who’d buy a Ducati hairdryer if it was a real thing that existed in the world.

Or you could hop on your actual Ducati, ride it, and let the wind dry your hair. If your hair is long, just braid it and let it stream out your helmet, so you’re both protecting that noggin and simultaneously getting airflow into your strands while avoiding those dreaded wind-induced snarls and tangles. Do you need a separate Ducati hairdryer? Not if you go fast enough.