This Café Racer Looks Like A 1950s Pizza Cutter 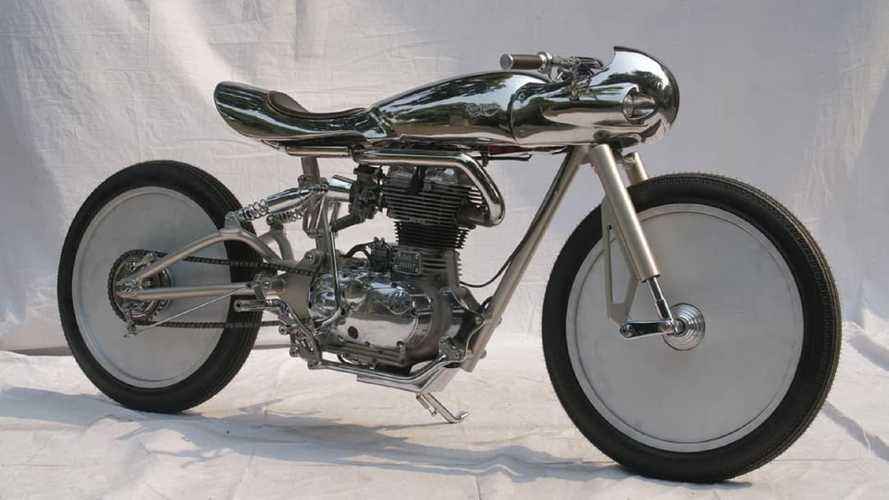 You could be forgiven for thinking this chrometastic Indonesian café racer is some sort of 1950s concept bike. Like so much atomic-age design, the Kromworks Bullet 500 is all curves and shiny metal. It looks a little like a vintage pizza cutter with thin 21-inch solid disc wheels, and a custom body that is vaguely reminiscent of a sculpted handle.

This Custom Scrambler Is The Royal Enfield We Really Want

The entire bike is custom built from scratch except the Royal Enfield Bullet 500 engine. Even that has been worked over as Kromworks decided to take out the fuel injection and add carburetion for aesthetic reasons.

Fans of 1950s movies might see a hint of the robot alien from The Day The Earth Stood Still in the cyclops front fairing and headlight assembly. The exhaust has been rerouted high and over the top of the engine, before exiting under the seat pan. The custom swing arm provides a mounting point for two horizontal rear shocks.

Indonesia is a hotbed for custom café racer builds, as an influx of ex-pat money merged with the abundance of small-displacement, affordable bikes and a passionate artisanal work force. Australian-owned companies like Deus Ex Machina put the Indonesian custom scene properly on the map during the mid 2000s, and the country has been pumping out incredible bikes ever since.

One of the frequent criticisms of some of these café racer builds is the lack of practicality. We couldn’t find an instrument cluster in any of the photos, and while I spy a brake cable heading to the front wheel it looks like the stopping power is provided by a small drum brake.