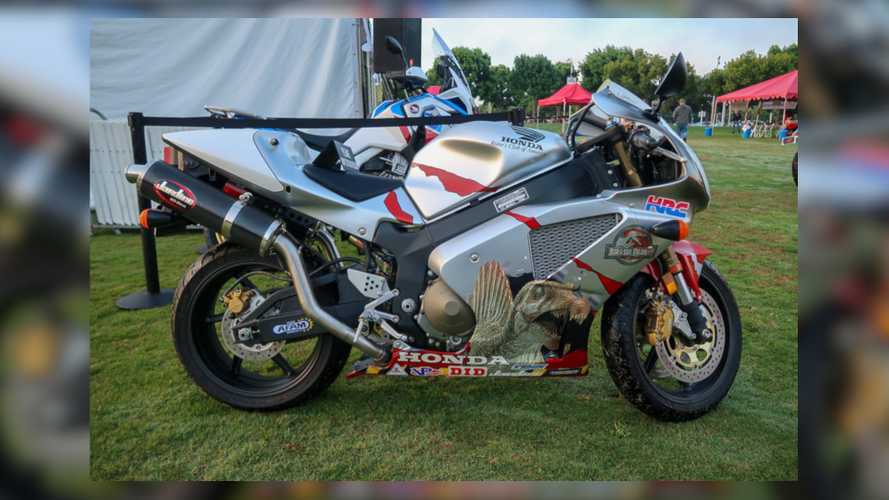 Buy a new bike for a good cause!

Are you worried that your two-wheeled baby is going to be lonely as you gently tuck it in for the winter? Are you also into truly special Hondas, and also interested in helping out worthy causes that benefit kids? If so, you’ll definitely want to know about two charity auctions that Iconic Motorbikes and American Honda are currently hosting.

Now through October 30, 2019, you can bid on this no reserve 2001 Jurassic Park III-wrapped RC51. The auction amount is currently up to $6,000 for a bike that has only one mile on the odometer, and is also still rolling on its original tires. All proceeds from the sale of this bike will go to support Ride For Kids and the Pediatric Brain Tumor Foundation—including the seven percent buyers’ fee!

Why Jurassic Park III? The story goes like this: Honda had a partnership with Universal Studios back in the day. Racers across various series had some Universal movie wraps on their bikes— including Nicky Hayden’s RC51 at Laguna Seca that year. Around the same time, Miguel Duhamel’s RC51 and Sebastian Tortelli’s CR250R both sported wraps for The Mummy Returns as a result of this deal.

This isn’t Hayden’s actual race bike, though. Instead, Honda wrapped a showroom-fresh RC51 with the same livery Hayden was running in order to display it at promotional events before it went into storage, never to be ridden—unless, of course, the auction winner slaps some new rubber on it and decides to take it out in 2019.

If the RC51 isn’t your thing, perhaps you’ll be more excited about the 1981 Honda CBX that Iconic and Honda are also offering to benefit the same charity. For one week starting on October 30, 2019, you can bid on this similarly unridden piece of Honda history through the Iconic Motorbike Auctions website. No word on whether these tires are also original—but for such a good cause, surely you can scrape together a little more for some appropriate rubber if you win.