For The ADV Nerds, Here's A Look At Dunlop's New Adventure Tire 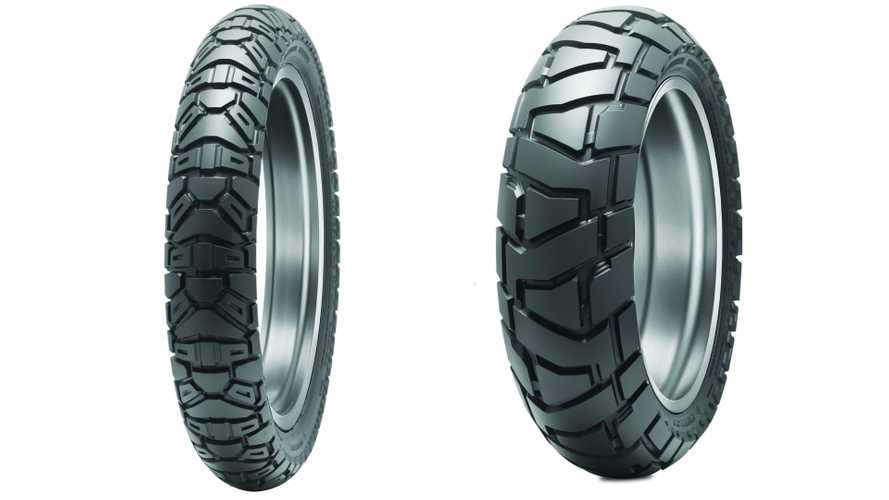 Dunlop just released its newest Adventure tire, the Trailmax Mission, and it’s nifty looking. What’s everyone so pumped up about? Adventure bikes are currently a pretty hot segment of the motorcycle market, and fitting tires to them that perform where a big Adventure bike needs that performance has turned out to be kind of a tough nut to crack.

Every rider is different, and what we ask of our motorcycles will be different, too. How often do you take your bike off road? How fast do you ride on pavement? How heavy is your bike, and how often do you ride with a passenger? All these pressures come into play when we are choosing our next set of tires. They’re our only contact with the riding surface, so it’s an important decision.

If you’ve ever ridden a motorcycle fitted with knobby tires on the street, you know how those knobs can conspire to make the bike feel like it’s squirming out from under you. Adventure tires tend to have bigger blocks so that they squirm less on pavement, but those tires aren’t as great as dedicated knobbies in mud or gravel. Everything about an Adventure tire has thus far been a compromise. But the more the segment grows, the better the tires are getting.

We here at RideApart aren’t ones to plug one tire or manufacturer over another, but we will spare you the hype and get to the core of the issue: a world with more tire choices is better. If we could test any of the tires that existed when the Adventure bike as a segment was new, we’d say they all pretty much blow. The current offerings have all of us who ride big, heavy adventure bikes on the edges of our collective seat.

Dunlop’s most recent entry looks like it has a few key features that add weight to their attractiveness: an uneven, staggered pattern down the center of the tire might spare us that lumpy feeling at low speed we get from knobbier tires. Blocky lugs that are consistent right to the edge look like they will lend more grip when we tread on deep sand or muddy surfaces. Also, the tread varies from standalone blocks on the Mission tires sized for smaller bikes, to interconnected blocks featured on the tires sized to be fitted to heavier ADV bikes, to keep the squirming in check.

Dunlop claims it was able to squeak 8,000 miles out of a rear Mission Adventure tire on a Suzuki V-Strom 1000, which is a heck of a feat for a claimed 50/50 tire, and one we can only hope isn’t overinflated. Next time I have a rim to spare, I will consider spooning a set of these onto my Super Tenere. Note, though, that the “fit checker” on Dunlop’s website seems to be broken, as I couldn’t find a single bike they claimed to fit, not even the ones Dunlop itself quotes just inches below as intended fitment: “Fits popular large and small displacement machines including the Honda Africa Twin, Suzuki V-Strom, BMW GS models, KTM 1290/1290S, 790R/790S, Yamaha Tenere and Triumph 800/1200 models,” and that left me feeling a bit flat about the whole thing.