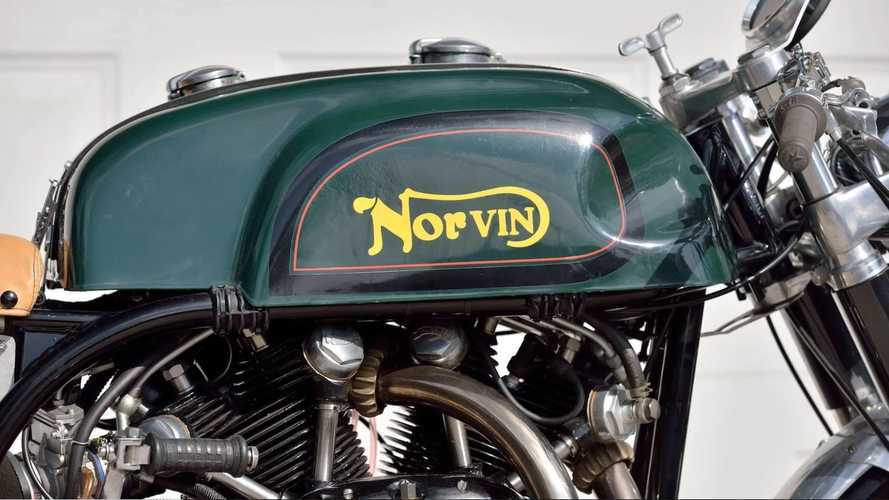 Imagine me and you, I do.

Modern motorcycles aren’t only masterpieces of mechanical engineering but they also contain the most advanced electrical systems to date. The electronic suites on today’s bikes continue to make them safer to operate while simultaneously making them inaccessible for garage tinkerers.

For newcomers to motorcycling, it’s hard to imagine that there was a day when amateur builders would shoehorn a Triumph engine into a Norton frame to make something called a Triton or cradle a Triumph motor in a Fritz Egli frame for what is known as an Egli-Triumph. While the days of the garage engineer have passed, that doesn’t stop us from enjoying the fruits of their labor. Labor such as this 1949 Norvin cafe racer—a Norton/Vincent hybrid—is scheduled to hit the Mecum auction block in January 2020.

Grab A Piece Of Weird Racing History With This Norton Rotary
⠀

In its day, the Norton Featherbed frame was hailed as a feat of engineering for its rigidity, a quality that was lacking in the legendary Vincent Black Lightning. While the Vincent’s steel backbone frame didn’t lend itself to the type of handling required for racing, the company’s fabled v-twin powered the fastest production motorcycles of the ‘40s and ‘50s. By combining the Norton frame and Vincent engine, builders benefited from the advantages of both designs and created one heck of a race machine—for the time.

This 1949 Norvin Cafe Racer was outfitted with upgrades like a modern clutch and GPS speedometer. Bringing the engine back up to speed, the builders swapped in new cams, a two-into-one exhaust, and flat slide carburetors. To improve reliability, a 12V alternator/electrics and an electric start were added to the hybrid build.

Atop the Featherbed frame, the owners rested a Norton Manx-style tank and a traditional bump stop seat to keep the rider locked in position. Up front, clip-ons were attached to a set of Norton Roadholder forks. Aside from the modern components, a set of period-correct 210mm front and rear drum brakes help the Norvin shed speed.

While hybrid builds were much more popular back in the day, Norvins were particularly rare due to owners’ reluctance to remove the engines from their expensive Vincents. With that in mind, we’re interested in seeing what the Norton/Vincent hybrid goes for once it reaches the auction block. If you’re interested in owning a piece of British motorcycling history, head over to Mecum for the details, and for good measure, start saving now.