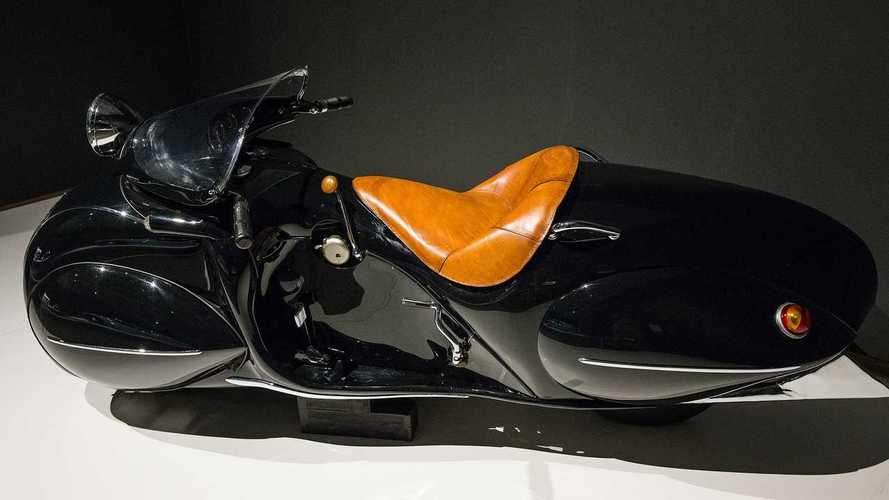 The standard 1930 Henderson KJ Streamline was anything but a streamlined motorcycle. It was a naked bike like pretty much every other motorcycle of its time. The word "Streamline" as used in its name simply as a marketing gimmick, similar to the controversial use of the word "Turbo" for the electric Porsche Taycan Turbo S, which, being electric, lacks any forced induction snails.

Enter one Mr. O. Ray Courtney. He wasn't a motorcycle fabricator by trade. He was a metalsmith for Oldsmobile, though, which meant he a thing or two about bodywork. He envisioned a streamlined motorcycle with swoopy art deco styling similar to the revolutionary Chrysler Airflow. In 1934, Courtney submitted his designs to the US Patent Office, then began working to transform his Henderson into a streamlined beauty.

Over a year later in 1935, not only did he complete his redesign of the bike, but he also received patent number 2,035,462 for his streamlined motorcycle. The end result looks more like a 1930s car than a motorcycle, with enclosed wheels, and even bulges on either side of each wheel resembling car fenders of the time. It even had a car-like dashboard with a variety of gauges.

Under the skin, the same 1,300 cc four-cylinder engine remained. The bodywork is said to enhance engine cooling rather than block it. The wheels were replaced with 10-inch scooter wheels, however, with balloon tires designed for aircraft to better absorb the bumps. Courtney also redesigned the front suspension using components from his employer, Oldsmobile, presumably to better fit inside the enclosed bodywork. The pedals are operated not with your feet, but your knees, allowing smoother control.

The end result is a work of art. It looks as though the Honda PC800 arrived 60 years early, though in a far more beautiful form. The modern Tilting Motor Works kit incorporates a similar fake radiator grill as this Henderson in its own bodywork, which replaces the original single front wheel.

Courtney only built one of these streamlined Streamlines, which is currently on display at the Frist Art Museum in Nashville, Tennessee. A design this spectacular really does belong in an art museum more than a motorcycle museum.