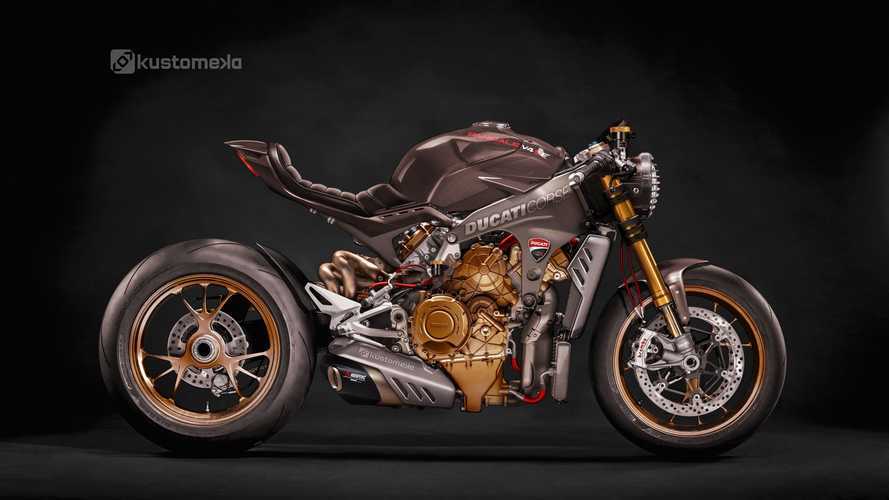 Over the course of 2019, Ducati’s Streetfighter V4 has amassed a legendary story and the production model hasn’t even been released yet. From the speculative online rumors to Ducati CEO Claudio Domencali confirming said rumors to the latest teaser, anticipation of the naked Panigale has grown to mythical proportions. Just as Carlin Dunne’s tragic passing at Pike’s Peak aboard the motorcycle threatened to cast Ducati's new Streetfighter into infamy, sightings of the bike on public roads brought it out of fantasy and into reality. With the motorcycling world anxiously awaiting the release of the Streetfighter at the Ducati 2020 World Premiere, French graphic designer Mike Kustomeka adds to the lore of the V4 by envisioning multiple iterations of the long-awaited model.

Unlike the super aggro Pike’s Peak version of the Streetfighter V4, which utilized pixelated camo on the fairing-less bodywork, Kustomeka takes a consumer-friendly approach. Inspired by classic liveries of the Panigale, Supersport, and Monster, the graphic designer dips the bike in Ducati Red, Arctic White Silk, and Yellow. While the Pike’s Peak paint purposefully obscured the design of the non-production model, Kustomeka’s toned-down aesthetic reveals the natural lines of the Streetfighter and makes it much more suitable for the showroom floor.

Drawing from years of experience in the industry and the styling cues of the Panigale V4, Kustomeka places touchstones like Ducati decals and badges along the gas tank and radiator shrouds. Aside from the yellow livery, each rendering receives the bronze engine and transmissions cases of the Pike’s Peak variant that took advantage of the fairing-less design and highlighted the mill even more. With matching bronze wheelsets, the French graphic designer takes the theme a step further and ties the entire package together.

In addition to the standard Streetfighter V4, Kustomeka also applies some artistic freedoms with the retro rendition of the bike. The designer removes the radiator shrouds, belly pan, and winglets to expose even more of the machine’s inner-working. Kustomeka then curtails the tail section and replaces the race seat with a tuck and roll saddle. Up front, the designer swaps the cowl for a classic round headlight and brings the Streetfighter much closer to the Monster.

While most of us will wait with bated breath for the introduction of Ducati’s Streetfighter V4 on October 23, 2019, the renderings scratch the itch for now. We just hope the colorways the Bologna firm releases look as good as Kustomeka’s and that the model lives up to the massive hype it’s garnered thus far.