What Is That Weird, Beautiful Bike? It's Not A CBX, It's A Benelli 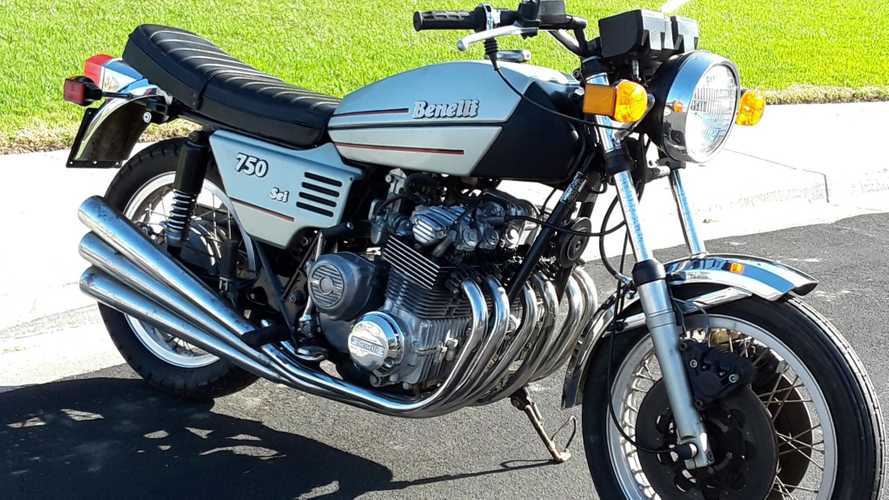 Italians manage to make machinery pretty no matter what.

If you’re not a regular reader of Bring a Trailer, you might not know that that site is generally pure temptation with a side order of bad ideas. This lovely offering does not stray from that model. It is a 1976 Benelli Sei, and if you don’t know what that is, especially if you love a Honda CBX, read on.

Did Someone Say CBX:

Benelli produced this 750 Sei in the 70s, and it was the world’s first production motorcycle with a six-cylinder engine. It was developed in coordination with Ghia, who designed the bike. The engine design is reportedly cribbed from its contemporary four-cylinder Honda CB500, with two extra cylinders slapped on. This particular machine is a Mk.1 series 2, with a transmission upgraded from the previous design, and is one of just 87 ever produced. It is the kind of thing that would be a jewel in any serious collector’s garage, even if it never runs again, just for its rarity and historical importance.

That is not to say it doesn’t run, though. The seller insists that after cleaning and refilling the carburetors, it started. Amazingly, the seller is only the second owner. The bike has 3,600 original miles on it.

The six cylinders are fed by three Dell’Orto carburetors, and it reportedly puts out 76hp, or at least it did when it was new. It has a five-speed transmission and a chain final drive. The bike has some corrosion on it, and it’s not fully complete. The seller (or the previous owner) removed some parts like the petcocks, intake boots and crankcase vent hoses. That’s a pretty typical list of the first things you strip to get at the carburetors just to see if this old beauty will run.

The machine will make someone a fine project bike, and whomever purchases it will know exactly what they are getting into as far as parts availability: it is a very rare machine, but has a lot of off-the-shelf bits that should still have rebuild kits available, like its Marzocchi forks and Brembo brakes.

If nothing else, it’s a head-turner. If you’ve ever been to a bike show and have seen the attention an old inline-six Honda CBX garners, imagine the crowds this bike will draw. If you’re into that sort of thing, of course.