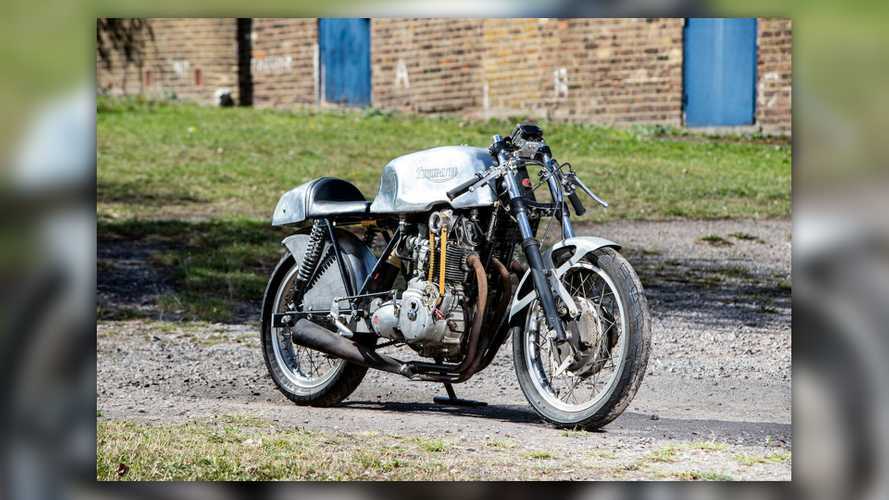 A glimpse at what could have been.

We talk about a lot of weird, rare bikes around here. Rare doesn’t even begin to describe this custom Egli-Triumph with prototype overhead-cam engine that’s due up for auction at Bonhams. The bike was built by Bill Crosby, founder of the London Motorcycle Museum, to show off what could have been for BSA/Triumph.

At least two overhead cam BSA/Triumph three-cylinder engines were built and used the existing triple-cylinder engine as a template. Crosby found one of the motors in 1983 and nearly a decade later turned it into a one-off Rocket III in time to attend the 1993 Beezumph Rally at Cadwell Park, UK. Crosby’s creation showed what could have happened if BSA/Triumph had gone all-in on OHC engines. As these things usually go, he decided that making a faster version of the motorcycle would be the best way to move forward, and began working on a racing bike that used the prototype engine.

He used an Egli frame that was developed specifically for the BSA/Triumph triple engine and built from there to include telescopic forks up front, twin shocks in the back, front and rear drum brakes, and a custom exhaust. The bike’s current state doesn’t reflect all of the work that went into building it, as Bonhams says it will take some work to nail down the ignition timing.

Engineers developed a new head with a single overhead camshaft that operated two valves per cylinder to adapt the motors for their purposes. Both engines were air-cooled and had a 750cc capacity. The engineers were hamstrung by corporate cost-cutting decisions, but were able to turn out two fully functioning engines, nonetheless.