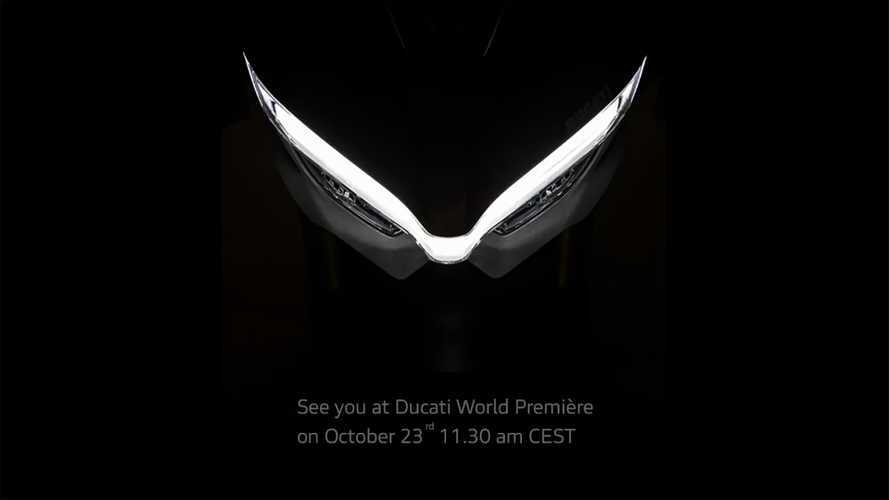 The Streetfighter V4 is coming on October 23.

There’s been ever-increasing hype surrounding the rumored Ducati Streetfighter V4 since the Spring after Ducati CEO Claudio Domenicali himself confirmed the new four-cylinder engine wouldn’t be limited to the Panigale. The company has since teased the model to help us build an appetite and it looks like October 23’s big announcement will be the day the long-awaited model will make its official debut.

Between countless teasers, spy shots, and even an official outing ahead of the Pikes Peak Hill Climb event in June 2019, Ducati has taken its sweet time to set the table for the launch of its new model.

The tragic events of July 1 have put a damper on the excitement surrounding the upcoming new model after racer Carlin Dunne tragically crashed and passed away in the saddle of the new V4’s prototype. Dunne was on target to set a new speed record, a testament both to his talent as a rider and to the bike’s abilities.

Ducati has now confirmed that on October 23, it will officially announce its 2020 lineup and the new Streetfighter V4 will be part of it. The teaser not only confirms the date the model will debut but also reveals some of the numbers we’ll get to see on its specs sheet.

The Streetfighter V4 will weigh in at a tiny 392 lb (12 lb heavier than the Panigale V4) and is expected to produce 208 horsepower (versus 214 for the Pani). The teaser also confirms the new hypernaked will be equipped with the same electronic assists as the Panigale. Another interesting feature the teaser highlights is the Streetfighter’s biplane wings—two pairs of winglets positioned on the bike’s flanks, reminiscent of the Panigale’s mandible-like winglets.

The model will make its official debut during Ducati’s big announcement at the end of the month which will be live-streamed on the firm’s Website and social media platforms.