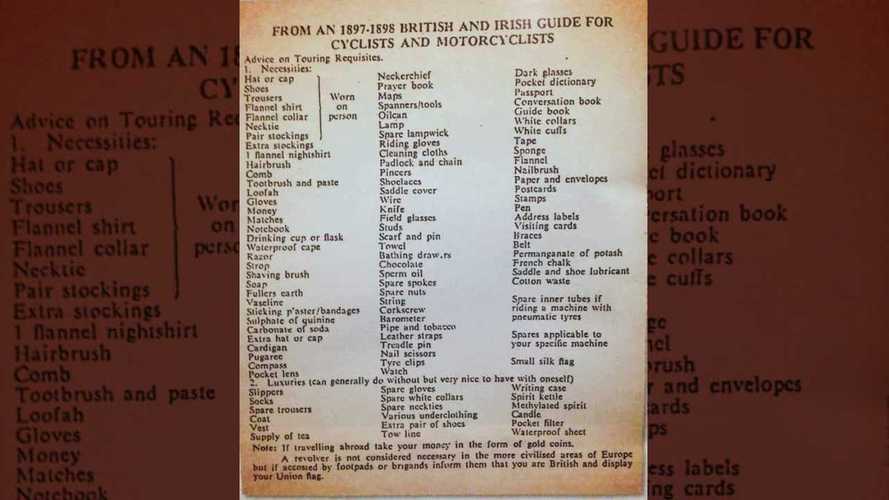 We've written endlessly about what you should take with you on a motorcycle trip. A Facebook post by Howard Whitehouse titled, "From a 1897-1898 British and Irish Guide for Cyclists and Motorcyclists," is making the rounds of many motorcycling groups, showing just how similar, yet different, what we took with us on a two-wheel trip was back in the late 19th century.

Take A Little Trip With Me:

Big Guy On Small Scooter Touring The Nürburgring Is Our Hero

The first section of "Necessities" involves a great deal of flannel. Keep in mind that riding gear and helmets didn't exist back then, so we can give them a pass on that. While modern clothing styles differ, you still want to bring enough clothes to keep you warm or cool, depending on the weather, as well as dry. Personal toiletries, aside from the loofah, are just about the same. So are basic tools, repair supplies, and spare tubes if you ride a bike that uses them. If you're leaving the country, a passport is required, perhaps now more than ever since you can no longer go to Canada with just a driver's license.

Other items on this list, however, simply wouldn't fly today. White collars and cuffs would still be a fashion statement, though exactly what they'd state, I'm not quite sure. A lamp and spare lamp wick are unnecessary, having been replaced by flashlights and lanterns. Paper and envelopes are available practically anywhere, but modern phones let you contact anyone anywhere, by voice, email, or any number of instant messenger apps. Gold coins for traveling abroad isn't really the way we do things anymore. A pipe and tobacco aren't so politically correct these days, and sperm oil would get Greenpeace staging a protest at your campsite. My favorite part, though, is the last sentence.

"A revolver is not considered necessary in the more civilised areas of Europe but if accosted by footpads or brigands inform them that you are British and display your Union flag."

Even in 1897, I can't imagine that highwaymen with malicious intentions would simply give up and walk away upon being told that their victims are British, or any nationality, for that matter.

Finally, I wonder how one would actually carry all of this gear on an 1890s motorcycle. Back then, they were little more than bicycles equipped with what we would consider lawn mower engines today. I'd have trouble fitting all this on a modern Gold Wing, let alone a glorified bicycle. Fortunately, I could probably leave my saddle and shoe lubricant, permanganate of potash, and sulfate of quinine at home to save some space.