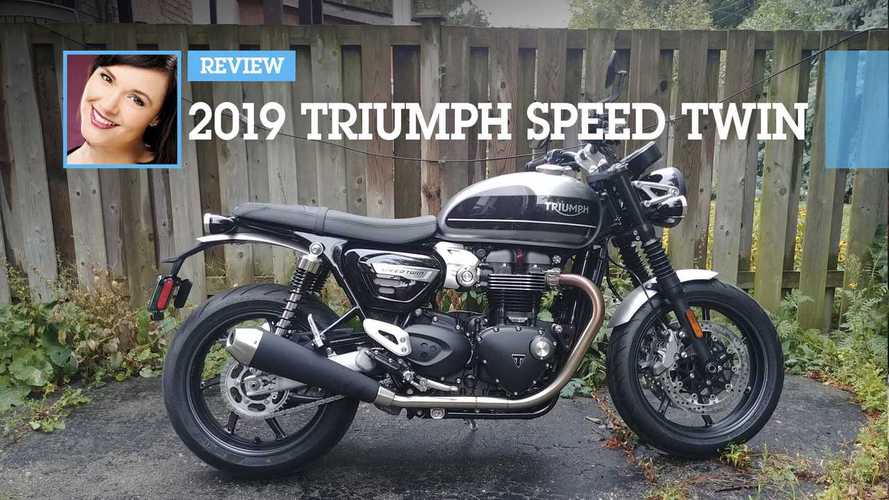 Update: There was a misunderstanding on the model-year we were given to test with information that early 2020 model-years were coming in. We adapted the information to reflect this, but we received confirmation that aside from color availability, the 2020 model will carry over unchanged.

While I’m able to look back and easily point at the highlights and the dark times of my test riding season, in all the years I’ve been writing about bikes I’ve never been struck by Cupid’s arrow. At least not close enough to the heart to make me seriously consider buying a certain motorcycle. You would think that with all the goodies we get our hands on, the danger of wanting to spend all our money on all the bikes would be a regular occurrence.

Thankfully, I’ve personally managed to Indiana Jones my way out of the Temple of Temptations. Whether it’s the bike itself or the price tag, I’ve always found something that helped me cool off my passions. That was until I rode the new 2019 Triumph Speed Twin. Sorry guys, I tried really hard to be objective about this. There’s no diplomatic or measured way to put this: I absolutely love the Speed Twin. This isn’t a review as much as it is a love letter.

From The History Books

The Speed Twin name itself isn’t new. In the late 1930s, the manufacturer introduced the original Speed Twin featuring what Triumph claims was the first successful parallel-twin engine. The Second World War put Triumph’s activities on pause and production of the Speed Twin only resumed in 1947 and ran until 1966, when it was finally put to rest. Fast-forward to 2018 and the Speed Twin made a spectacular comeback.

Triumph unveiled the Speed Twin in early December last year as the lovechild of the Thruxton and the Bonneville. The idea behind its design was to take the elements that make both models so great and combine them into a sort of hybrid. Of course, most of the time when you hear all those fancy words and raving, it can easily be dismissed as marketing fluff. I mean, most of the parts used on the Speed Twin are existing Triumph bits and pieces. The result could have been a watered-down Triumph with no real identity. Boy was I caught off guard.

Dat's one nice bike right there.

Right off the bat I was already sold on its looks. A Bonneville made to look sportier? I’m down for that. The Speed Twin is a handsome bike that elegantly combines stylistic cues borrowed from both its parent models. From the Bonneville T120, the Speed Twin receives its high-set handlebar, rounded gas tank, flat saddle, and classic naked bike silhouette. From the Thruxton, it borrowed its tipped-forward stance, upswept muffler, and bar-end mirrors. The result is a bike that doesn’t look quite like anything in the Triumph lineup, but that fits right in nonetheless.

The bike borrows its engine form the T120 and Thruxton; a 1200cc parallel-twin mated to a six-speed transmission. This iteration of the engine produces 96 horsepower and 82.6 lb-ft of torque, which is more than the Bonneville, but 1-hp short of the Thruxton. The biggest difference the Speed Twin brings to the table, however, is its weight. It tips the scales at 432 lb, which is 21 and 61 lb lighter than the Thruxton and Bonneville respectively. This means that the newcomer offers the best power-to-weight ratio of the lot.

The Speed is mounted on a pair of 17-inch wheels wrapped in Pirelli Diablo Rosso III tires and jacked on a 41-mm fork with 4.7-inch of travel and a set of twin shocks at the back. Stopping power is brought to you by Brembo and Nissin. The front wheel is armed with two four-piston Brembo calipers biting into a pair of 305mm discs, while the rear wheel is equipped with a two-piston Nissin caliper and a 220mm disc.

But How Does It Really Ride?

The numbers look good on paper, but they don’t mean anything if they don’t translate well to real-life applications. When I picked up the Speed Twin, I had my fingers crossed. I don’t naturally root for bikes I test, I let them speak for themselves. For some reason, though, I was partial to the Triumph and I was really hoping it rode as well as it looked.

Taking off from the dealer, I only had a few hundred feet to quickly cross over four lanes to make it to the highway on-ramp. Just like that, the Speed Twin smoothly sprinted into action and without a second thought about my speed, with the confidence of a track day enthusiast, I leaned into the ramp’s bend with ease. As I pulled the bike back up, I felt a rush. The Speed is surprisingly easy to toss but also incredibly steady. It willingly dives in the curves with more eagerness than I will ever have and maintains its trajectory without arm-wrestling you through it. The bike isn’t afraid of eating twisties for breakfast and it does so with ease and confidence.

The good-natured twin is ready to give you as little or as much juice as you want. It doesn’t want to throw you off the saddle nor does it want to bore you out of your mind: the throttle input is supple and precise enough to give you the right amount of going power. There’s no need to continuously fiddle with the throttle to maintain a constant pace but keep in mind that the engine braking is quite torquey. Releasing the throttle will slow you down considerably—a little quirk that’s easy to get used to and to use to your advantage.

The Speed happily cruises along at highway speeds and then leaps into action as soon as you open fire, even at low rpm. Don’t be fooled by its looks: it can most definitely go and it can go fast. The power is there and surprisingly flexible. In addition, the 1200cc is a low-revving engine with a redline set around the 7,000rpm mark. The thumping it produces keeps undesirable vibrations at a minimum, making it comfortable for longer periods of time.

Let me sing you the song of my people.

Speaking of thumping, the note that emanates from the dual tailpipes is a real treat. The deep purr of the well-balanced engine creates music that made my insides all tingly. Think of a sailor visiting Sirens Island, except for the part where I tie myself to the mast. I kept looking for opportunities to open the throttle, increase the rpm, and listen to the engine sing.

The braking power matches the bike’s personality well. It’s efficient and responsive, unlike other models where the brake pedal feels like stepping on a loaf of bread and the pads gently hug the rear-wheel into submission. I like to feel that my actions to slow the bike down actually do something.

Once you hit the city, the Speed’s small waist makes the bike easy to handle in an urban setting. The 31.8-inch seat height also makes the reach to the ground accessible and comfortable—my 5’8” self easily flat-footed the bike on each side.

The riding stance is comfortable. The angle in the saddle tips the rider slightly forward, making the handlebar easy to reach without having to put too much weight on the hands. The footpegs are positioned toward the back, but the distance from the saddle means a nice close-to-90-degree angle in the knees ensures prolonged comfort. After an hour and a half in the saddle, my bottom started to get tired before my knees did.

While I’m not usually a fan of taking a passenger on a bike—a personal preference—I decided to leave the city behind and head for the countryside with a partner in crime for a few hours of joyriding. The engine worked a little overtime to haul our combined weight but did so pretty elegantly. It might not be the ideal passenger bike, especially in the absence of proper grips, but if you’re happy having your passenger hug you, know that it is perfectly doable.

The one flaw I found with the Speed Twin is the position of the cylinder heads in relation to my knees. While the gas tank has convenient knee dents, the riding geometry actually positioned my joints a bit lower on the frame. I regularly found myself squeezing the top of the engine with my knees, which is an unsettling feeling. Combine that with the impressive amount of heat produced by the block and you get a nice BBQ-like experience when stuck in traffic under the hot August sun.

Did I Mention I Love It?

At this point, how could I not be in love with the bike? It checks off pretty much all the boxes on my personal “perfect bike” list and more. I wanted to like the Speed Twin, but I didn’t expect to love it. The worst (best) part? It’s not even that expensive. The 2019 Speed Twin is priced at $12,200. When you consider that Triumph didn’t get too greedy, this leaves very little for me to say to try and convince you of how good the bike is. I know, I’m gushing. I hate it. It’s hard not to.