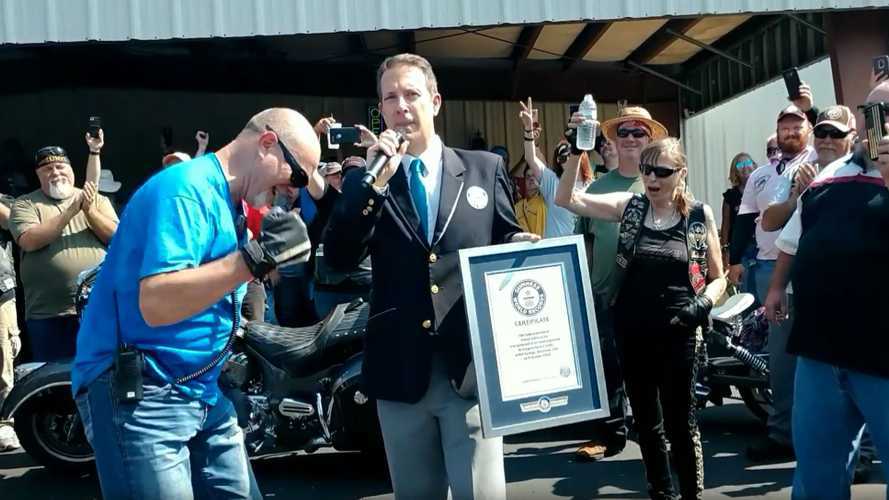 If you billed it, they will come.

Indian Motorcycle has seen steady growth in the past few years. Driven by the popularity of the Scout with new riders, the success of the Wrecking Crew, and the nostalgia of the Indian badge, the brand offers a performance alternative to that other cruiser manufacturer. With Polaris as the current rights holder and operator, America’s first motorcycle company has grown its customer base while cruiser competitors continue to struggle with younger demographics. Due in part to the brand’s flourishing business, 651 riders in Hot Springs, Arkansas recently broke the Guinness World Record for the largest parade of Indian motorcycles.

According to Wendell Roberts, board member of the Arkansas Honor Ride, breaking the world record began as a joke between organizers at last year’s Hot Springs Indian Get Together. The prospect of setting a new record gained legs once Roberts brought the idea to Rob Gregory, the owner of Jacksonville’s Gregory Polaris dealership.

Set in Minnesota in 2017, the previous record for the largest parade of Indians only consisted of 274 participants. Gregory knew that he could rely on his customer base and the Indian community when he set up the registration for his attempt. Though more than 700 riders pre-registered for the event, numbers alone don’t break parade records⁠—you still have to ride.

Guinness World Book of Records Adjudicator Phillip Robertson attended the event and made sure that the attendees adhered to a particular set of rules. The bikes had to start⁠—and finish⁠—in a parade formation over a two-mile course. Additionally, Guinness disallowed gaps of two bike-lengths and riders had to maintain a speed of 10mph. Luckily, Gregory and crew were afforded three attempts, and they would need them.

The first effort didn’t go well, with speeds exceeding 10mph and gaps of seven vehicle-lengths developing in the formation.

"We had to disqualify the attempt (after) around 120 riders had passed," Robertson said. "It was more of a ride than a parade.”

After moving the starting line for the second attempt, Gregory and crew kept rank and captured the world record for the largest parade of Indian Motorcycles.

Speaking of the victorious effort, Gregory said, "I knew we had two more attempts, and practice makes perfect."

Gregory and Roberts set out to capture the world record in order to drive more attention for future Indian Get Togethers. Breaking the record certainly drew global attention with travelers from the Czech Republic, Iraq, and 41 US states rounding out the field of riders. If the Indian Motorcycle community continues to rally behind the brand like this, there’s definitely more growth in the company’s future.