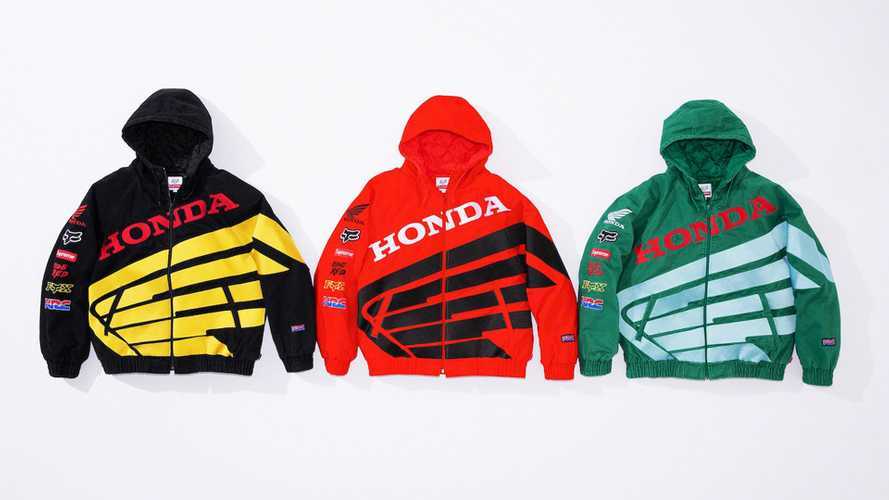 Retro high-end clothing company Supreme is teaming up with Honda and Fox Racing to release an exclusive and limited-run clothing collection in early October, 2019. The three companies have worked together on streetwear and motorsport items in the past, so the partnership is a natural marriage for everyone involved.

This isn’t the only time the brands have teamed up. Supreme’s 2019 Fall/Winter collection included a collaboration with Honda on a limited edition CRF250R. The result of that partnership was a full-on red-liveried bike with Supreme logos plastered on nearly every surface. The changes were only skin-deep, though, as none of the bike’s mechanicals got an overhaul to go with its new clothes. The standard CRF250R costs just under $8,000, but there’s no word on what the Supreme bike will run. If Supreme’s work with Coleman on a minibike is any indication, we can expect prices to be far above the standard MSRP. The standard Coleman mini was $499, but that price jumped to over $3,000 once a few Supreme logos were plastered onto the side. We can be sure that it’ll sell out regardless of the price.

This collab, however, is all about the streetwear, and they’ve brought Fox Racing along for the ride. The Supreme x Fox Racing x Honda collection features items like a puffy zip-up jacket, a zip-up hoodie, racing shirts, helmets, and a work shirt. The clothing will hit stores and online outlets on Thursday, October 3, 2019. Buyers hoping to snag one of the limited-edition Honda motorcycles will have to head into a store, as they won’t be available on the website.

Supreme has a history of supporting all kinds of motorsport, particularly motocross. In the past, the company has dropped clothing and other items in collaboration with Fox Racing, so this year’s collection is not surprising. Everyone from Nike to Brooks Brothers has gotten in on the Supreme action, with some of the collaborations’ items selling out quickly with skyrocketing prices on the secondary market.