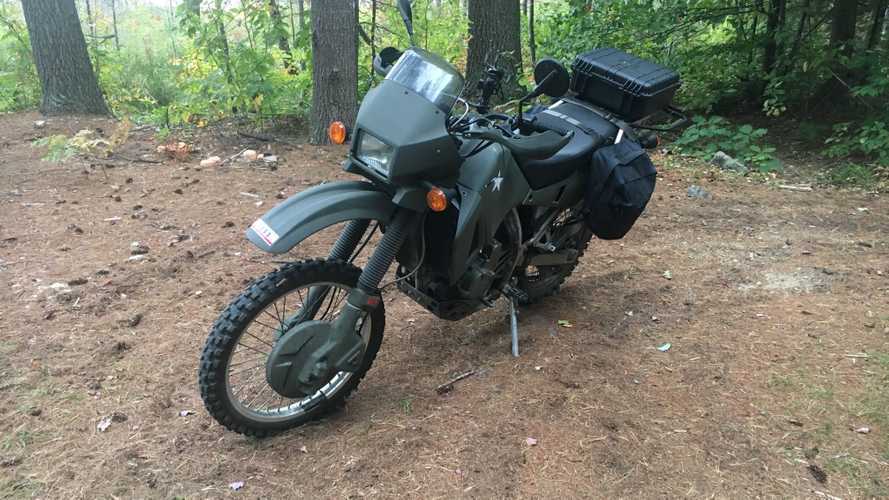 The right tires can turn your bike into a dirt monster, a street machine, or a true dual-purpose vehicle.

Tires transform a bike. We already know this. In fact, I've written about this before on my other bike. When it comes to a dual-sport or adventure bike, though, your tire choice has an even more profound effect on the bike's capabilities. Everything I said before is still true, but on a dual-purpose bike, you're also precisely dialing in your balance between pavement and dirt with which tire you choose.

A Good Set Of Tires Changes Everything
⠀

Can You Make A Tire Out Of Duct Tape?

My Kawasaki KLR 650 came with a set of Kendas that have no model name or number printed on them. The tread pattern seemed to be more street-oriented, but they did all right off-road unless I got into sand or mud where they couldn't dig in for grip. I've put nearly 2,500 miles on my KLR over the past three months, and these tires were understandably not as fresh as when I got the bike. In addition, Kate had been trying to throw her spare set of KLR wheels with more dirt-oriented tires at me so I could wear them out, then let her put some tires she really wants on them. Since the Kendas were looking ragged, I took her up on that offer last weekend.

Kate's wheels wear a pair of Dunlop D606 tires. I didn't realize just how dirt-oriented they are until I saw them. I was expecting a 50/50 tire, but these are more like a 90/10 split. That's OK, though. I figure that my Honda PC800 won't be selling before winter at this point, and it's getting cold enough in the mornings that I'll want its wind protection for my commute. For now, at least, I can set the KLR aside for dirt, riding to dirt, or riding home from dirt.

Out with the old, in with the not quite as old.

My KLR doesn't handle pavement as well as it used to, nor did I expect it to, but it's not bad, either. Mostly the front tire doesn't feel as well planted in paved turns as it used to, so I simply don't dive into sharp corners at speed. On dirt, though, it's a whole new bike. I don't need to slow down at all for dirt roads, and actually feel more stable there than on paved ones. Mud is a non-issue since the thick knobs dig in and propel me forward. I'm still not great on loose sand, but the bike doesn't slide around nearly as much as before. This gives me enough confidence to hit it with a bit of speed, which is the key to getting through sand in the first place.

These Dunlops have turned the KLR into a serious dirt machine at the expense of some street performance. What's interesting is that a simple set of road tires would swing the pendulum in the opposite direction. Road tires on a dual-sport is the basic description of a supermoto, which is a great performer on the road or track. There are also tires like the Shinko 705, a popular choice among the KLR crowd. Like the KLR itself, they don't excel on dirt or pavement, but they perform decently on both surfaces. Kate has these in mind for her own KLR. I'm leaning more toward the blockier Shinko 804/805. Neither of us is wrong. Since Kate's riding is more pavement than dirt, the 705 is the better choice for her. I actively seek dirt and have lots of great dirt riding nearby, so the 804/805 is the better choice for me. That's the beauty of tires. The model you choose can fundamentally change and optimize your bike's performance for whatever surface you prefer to ride.