You Could Own The Triumph That Inspired On Any Sunday 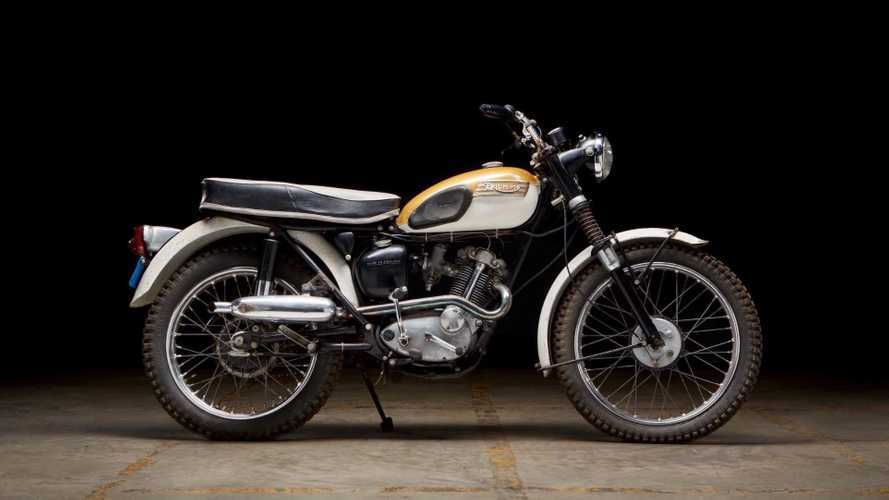 In 1966, Bruce Brown released the seminal surf film The Endless Summer. With a sudden flood of funds—Endless Summer brought in about $20 million at the box office in mid-60s money—Brown did what most overnight successes would do and traded in his Honda 50cc step-through for a Triumph Mountain Cub. Though upgrading to a 197cc motorbike was quite modest, the little T20 opened up a whole new world of riding to the Director.

Brown explored trails, raced in the desert, and eventually befriended Hollywood Star and professional badass Steve McQueen. The two later collaborated on the groundbreaking motorcycle documentary On Any Sunday with Brown directing and McQueen producing and appearing in the film. Now, you can own—or at least bid on—the trail bike that led to one of the greatest motorcycle films of all time.

Triumph’s Mountain Cub was the US-version of the T20 Triumph Tiger Cub and largely developed from the T15 Terrier. Aside from the adorable names, Triumph’s trail bikes sold very well, due in part to the deliberate resemblance to the Bonneville of the time. To capitalize on the models' popularity, Triumph released numerous variants of the Mountain Cub for road, enduro, trials, scrambles, and trails.

The Cub’s single-cylinder, overhead valve engine produced 10 horsepower and a four-speed gearbox drove power to the rear wheel via chain drive. The little Triumph only reached a top speed of 66mph. While those numbers aren’t impressive by today’s standards, the T20’s four-stroke single offered sufficient toque compared to its two-stroke competitors. Triumph started production of the Cub in the mid-'50s and the TR25W ‘Trophy’ replaced the model in 1968.

By the looks of the photos, Bruce Brown’s kept his Triumph Mountain Cub in great condition. Brown owned the unrestored trail bike for nearly 50 years before selling it to a close family friend shortly before his death in 2017. The bike hasn’t been used in years and will need to be recommissioned, but the motor does turn over the odometer only reads 1,377 miles. Brown’s complete and original Cub also comes with a copy of the bill of sale signed by the On Any Sunday Director.

Centered on track races and off-road competitions, On Any Sunday captured a snapshot of the motorcycling community that opposed the biker gang image pervading the late ‘60s. Highlights of the film included a peek into Mert Lawwill’s race prep and luckless defense of the number 1 plate in the 1970 AMA Pro Flat Track Racing season. The film also featured off-road races of the era with the carefree Malcolm Smith utterly dominating the terrain and fellow competitors.

If you can’t afford Brown’s Mountain Cub, treat yourself to a viewing of On Any Sunday. Whether you’ve seen it a million times or just learning about it, enjoying the super-slow-motion shots, telephoto compositions, and groovy soundtrack is the perfect way to spend a Sunday. Sometimes it doesn’t take buying a new motorcycle to appreciate something new about motorcycling.