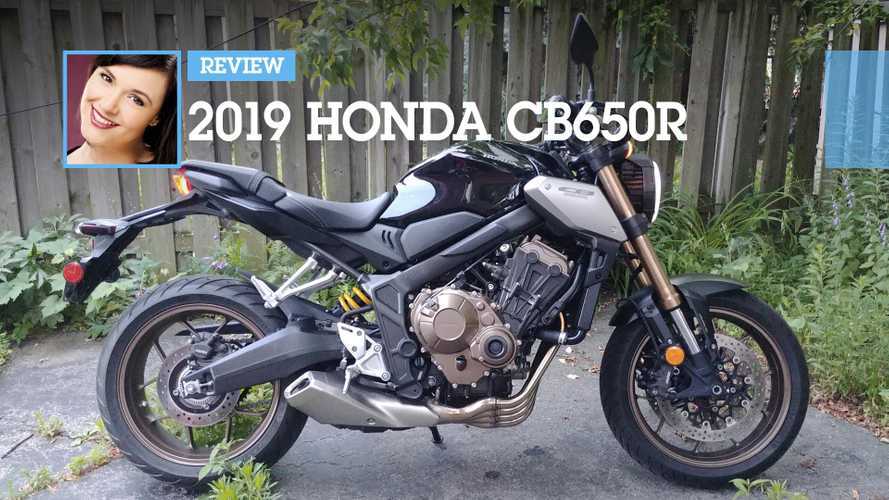 After unveiling the new CB1000R in 2017, Honda doubled down in its Neo-Sports Café lineup at EICMA 2018 with the unveiling of the new CB300R and CB650R naked roadsters. The new duo of R models took over the outgoing F series that left riders mildly underwhelmed and replaced them with something more exciting to look at.

To go from F to R, Honda redesigned the 650 from the ground up. The CB650R is built on a diamond steel frame with pressed swingarm plates and twin elliptical spars, tuned to provide more feedback. This results in a chassis that's 13 lb lighter than its predecessor.

Honda also took this opportunity to review the riding stance. The handlebar is shifted forward and the footpegs are shifted slightly towards the back, creating a sportier leaned-in shape.

The R uses an upgraded version of the F’s 649cc inline-four engine, tuned to produce more power thanks to new pistons and a modified valve timing. It is now rated at 80 horsepower and 42 lb-ft of torque—a 5-percent increase in power.

The Good And The Bad

The new 650 is gorgeous, especially compared to the outgoing F model which looked aged and bland. The Neo-Sports aesthetic works for me. I attended a motorcycle gathering during my week with the CB and it had no issues standing out from the crowd. Honda has come up with a handsome design, which is one of the model's strong points. That and the winged badge—Honda has an enviable reputation when it comes to reliability.

These are the two things that will make you pick the CB650R over a Suzuki SV650, a Yamaha MT-07, or a Kawasaki Z650. When it comes to everything else, however, the bike has fallen victim to the Honda curse. The company has a reputation for building good and reliable vehicles that cruelly lack flavor. The new 650 is no exception.

There’s nothing inherently wrong with the CB—there simply isn’t anything really special about it either. It’s both a good and a bad thing. It's a good thing because this is the type of motorcycle you can buy with your eyes closed. You can show up at the dealer, point at it, pick it up a few days or weeks later and take off and you know you’ll be happy with the product.

It's a bad thing because some of its competitors have much more character and are offered at a much, much smaller price tag. At $8,899, the Soichiro special is $1,500 to $2,000 more expensive than the other of its kind positioned well below the $8,000 mark.

Despite a bit of a bland personality, the CB650R is an incredibly easy bike to manage in the city. At 445lb, you won’t have any issues pushing it around for parking or balancing it in traffic. The seat height is set at 31.9 inches which creates a low-enough profile to make the bike accessible to a wide range of riders. Shorter riders will find it easy to get on it and to live with it on a daily basis, even if they’re not able to flat-foot it.

The clutch lever, it feels rather light in the hand, which is an advantage, especially in the city, where engaging the clutch is a regular occurrence. As for the six-speed gearbox, the changes are smooth and straightforward—no need for a secret sequence to find your gear or even the neutral.

Once you hit the highway, the engine offers decent, linear power that will get you up to cruising speeds in no time with enough leftover juice to get you moving when you need to get out of the way or accelerate promptly. One thing I did find is that the engine tends to get a bit buzzy once I reached the 6,000rpm mark. Interestingly, instead of feeling the vibration in the hand grips, on the CB, I felt it in my knees and thighs pressed against the gas tank—an unusual sensation to say the least.

As for the riding position, it’s a classic upright stance with a close-to-90-degree bend in the elbows. The steep curve of the gas tank keeps the handlebar closer to the rider for a comfortable reach. The pegs are set rather high on the frame and towards the back, which positions the feet maybe a foot away from the seat. This creates a bit of a steeper bend in the knees which can become uncomfortable after a while—as any sportier stance goes.

The TFT display shared by the Neo-Sports family members is new for this year as well. The speedometer, odometer, revolution gauge, gear, fuel consumption, and fuel gauge share the same digital screen in an easy-to-read info cluster. The 650 doesn't offer any selectable riding modes but is equipped instead with the Honda Selectable Torque Control System designed to optimize the power sent to the rear wheel and reduce spin.

The word I would use to describe my experience of the CB is "unremarkable". As I discussed earlier, it’s not a bad thing because, ultimately, I didn’t find anything wrong with the bike. It might not be as spunky or moody as other players in the segment, but it does almost everything right and checks off most of the boxes potential customers are shopping for.

If what you’re looking for in the mid-range segment is a little something accessible and easy to get on, the 2019 Honda CB650R is a great pick. Just don’t expect something with a lot of personality or a spicy flavor to it—this is isn’t the CB’s game.