This Custom Drag Bike Doesn’t Look Like A W800 Anymore 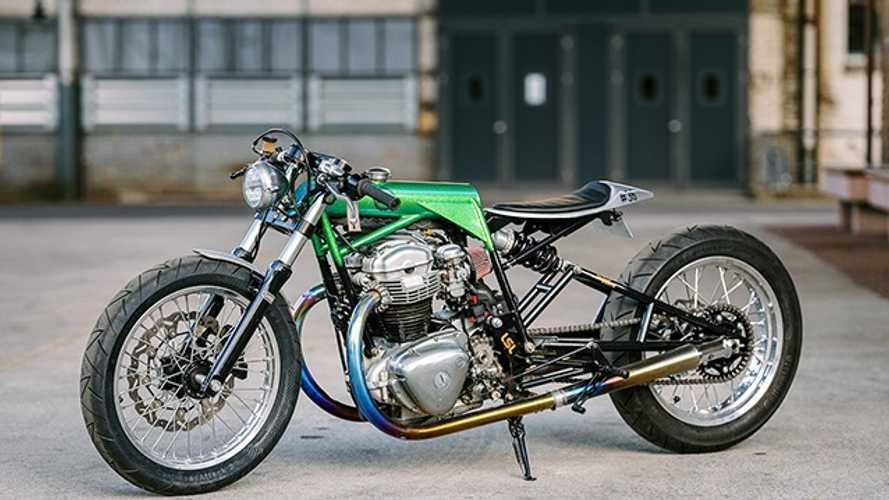 From 1967 through 1975, Kawasaki produced the W series based on classic British motorcycles of the time, particularly BSA’s A7. Introduced in 2011, the W800 harkens back to the style of the W series but adds modern technologies and conveniences. Though the W800 heavily relied on nostalgia and classic design, the German custom shop Schlachtwerk felt that the form should be updated to match the function and the Wasabi W800 was born.

In Case You Forgot:

Thomas Thoring is no stranger to Kawasakis. Prior to building the Wasabi drag bike, he specialized in builds based on the W800’s predecessor, the W650. Familiarity with Kawasaki’s air-cooled, four-stroke parallel twins came in handy as Thoring needed to juice up the 2012 W800 donor bike’s 45 horsepower engine to make it a respectable street dragster.

Based in Frankfurt, Schlachtwerk is centrally-located in Germany. That geographical advantage would benefit the build as Thoring needed to outsource numerous parts of the build to friends throughout the country. Located in Verl, about 160 miles from Frankfurt, frame engineer Stefan Trautman would need to visit Schlachtwerk’s shop to assist with fabrication. For engine work, Thoring sent the 2012 W800 mill to Ulf Penner, his tuning specialist 275 miles away in Bremen.

Lacking in the power department, Penner increased the 773cc engine’s capacity to 854cc. No, he didn’t equip the ride with nitrous but a dyno-tune, re-jetted carburetors, and a titanium exhaust system bumped the stock 45 ponies up to 75 horsepower. With the motor putting out maximum power, Thoring knew he also had to reduce the Kawasaki’s weight if it was going to win any street light races.

To help shed some pounds, Schlachtwerk removed the W800’s metal fenders, gas tank, and side covers. A stripped-down Moto Guzzi inspired Thoring’s idea to integrate the gas tank into the backbone of the frame and Trautman helped craft the fuel storage with reinforced struts. Ditching the dual-shock swingarm, the duo fabricated a new monoshock setup that greatly improved the handling of the Kawasaki.

For the rear monoshock, Thoring called on Wilbers Suspension 240 miles away in Nordhorn. The team also rebuilt the subframe to accept a cafe-style tail section. The hand-rolled alloy unit received a meager helping of padding and leather to retained the build’s svelte figure. A set of custom rear-set pegs also provided a more committed position for the rider.

“It’s a little mean Japanese-based toy with some nice German-engineered ingredients,” Thoring said. “The hard thing was the first test ride, you are giving full-throttle on a complete self-made bike with a good power to weight ratio, (it’s) a bit scary (the) first time.”

Aside from all the German-produced parts, Thoring repurposed the forks from a W650 for the front end and appropriated a set of KTM 690 wheels wrapped in Continental tires. Beringer four-piston calipers coupled with 320mm discs completed the unsprung setup.

To make the rig road-legal, the team outfitted it with minuscule Kellermann Atto indicators on the bar ends and plate holder. A retro Japanese headlight and a small Motogadget tachometer between the LSL clip-ons brought the build up to code.

The Wasabi build is a product of global influences with British style by way of Japanese design matched with German engineering. While Kawasaki steeped the W800 in retro styling and performance, Schlachtwerk’s build proved that it’s a great canvas for customs, especially if you have a little help from your friends.