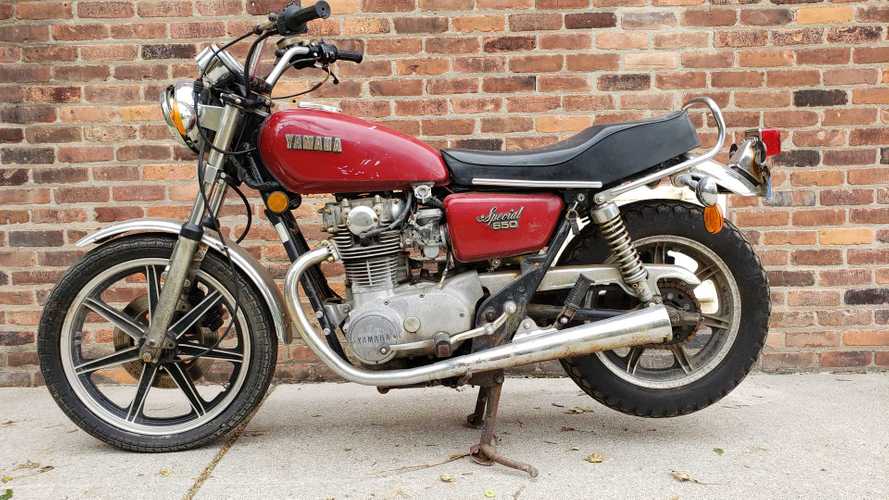 I said I wanted a Yamaha and one came my way!

You may recall that on Monday I spilled a lot of digital ink pissing and moaning about how my garage is full of Hondas despite me being a Yamaha man. It was an existential crisis, I said. I, the most loyalest and biggest Yamaha fan in the world, had a garage full of classic Hondas and actually liked them. I gnashed my teeth and rent my garments and said that Honda ownership was a base betrayal of my self-proclaimed Yamaha fanaticism. Well, guess what. In the two days since I wrote that a new (to me, of course) Yamaha has fallen into my lap and friends, it is the best bike.

What you see here is the pride of Iwata, Japan—a 1979 Yamaha XS650SF in carmine red. I think. I'm sure it's an XS650 'cause it says so on the side cover and I'd recognize that engine anywhere. The "SF" part and the color are up for debate though, since I'm not entirely sure what year this thing is. That doesn't matter, though. What matters is that I finally have an XS650, a bike I've been wanting ever since I started riding. So, you know, I'm pretty stoked.

This bike has a pretty sad story, friends, so get out your hankies. Last registered in TYooL 1987, it was abandoned in a pole barn after the previous owner stiffed his landlord and fled. That was five-ish years ago. So there it sat, unloved and abandoned, with no title, no keys, flat tires, and no one to love it. No one until I came along, that is. It's rusty, it's crusty, the tires are 30-ish years old, and it needs a ton of work, but I don't care. The engine turns freely, has compression, and it's shockingly complete and original. Most of these things were either chopped up long ago or, at the very least, fitted with pod filters and after-market pipes. This one still has the stock airbox!

The beacons are lit, a small bike calls for aid.
Don't worry, little friend. We'll get you fixed up in no time.

So, what's my plan for this one? I'm not sure yet. I need to get keys cut for it and give it a thorough inspection first. After that, who knows? SBR Protocol states I should fix it and flip it. If I do that, I'll probably spend the money on an older XS-1 or XS-2. Our own Bryan Wood is already encouraging me to chop it up but, eh, there are already enough half-assed, XS650-based customs out there. Ultimately, I'll probably just keep it as it is—a beautiful time capsule of late-70s Yamaha goodness. I mean, if it was good enough for Genichi Kawakami, it's good enough for me.