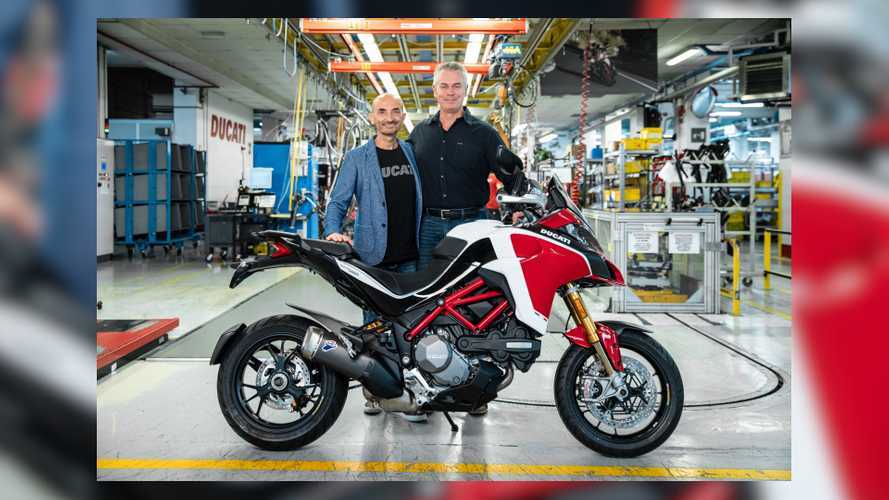 The V4 Multistrada is officially on its way!

It’s the Ducati Multistrada’s sixteenth birthday, and on this auspicious occasion Ducati announced that it’s built 100,000 of the legendary bikes. The magic six-digit milestone was crossed with production of a 1260 Pikes Peak that features a customized laser marking on the top yoke, and was built for German customer Dave Hayward.

The Rumor Mill So Far:

To celebrate such an important milestone, the bike was presented to Hayward by none other than Claudio Domenicali himself. Additionally, the laser etching on the top yoke of this very special Multistrada says that it is “Multistrada Centomila,” which alone sets it apart from every other Multistrada in existence.

While hitting this milestone is no small achievement, Ducati took this announcement over the top by sliding in one tiny line toward the bottom that puts an end to the rampant speculation of recent months about the Multistrada’s future.

It reads, “Development is ongoing, and in 2021 the Multistrada family will expand to see the twin cylinder 1260 and 950 motorcycles joined by a version with a new, specific V4 engine.”

We already knew that the 1260 GT will be coming later in 2019—and that we shouldn’t get our hopes up for a V4 Multistrada this year. We also mentioned that the upcoming 1260 GT may be the bike on which Ducati unveils its radar adaptive cruise control for the first time.

Still, speculation is fun, but confirmation that we will have a V4 Multistrada in the foreseeable future is ultimately reassuring. It would be totally unlike Ducati to not get every possible two-wheeled configuration that customers could possibly want out of their latest and greatest engine—so in a way, it’s a comforting confirmation that all is right in Bologna.

We don’t know when we’ll see the V4 Multistrada unveiled for 2021—but if we had to guess, it’ll probably be around this time next year, when we’re busy madly speculating on Ducati’s October 2020 livestream announcement and subsequent EICMA plans. Are the High Moto Holidays the best, or are they the best?