US Bike Thefts Are Down Since 2016 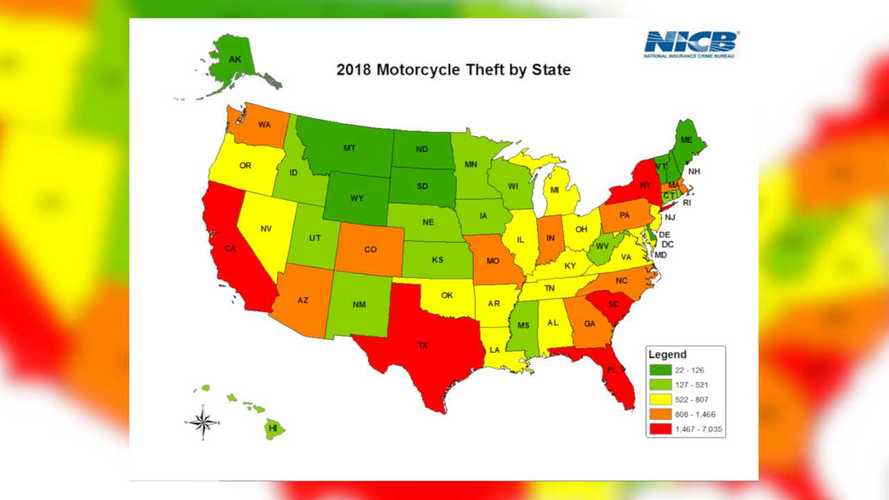 While motorcycle theft is clearly a significant problem in the US, there’s some good news. According to the latest National Insurance Crime Bureau report, motorcycle thefts across the country went down in 2018. In fact, according to the NICB—which is a non-profit membership organization for the American insurance industry—thefts across the country have been on a steady decline since 2016.

Getting Those Bikes Back:

Unsurprisingly, motorcycle thefts in the US are at their peak during the summer months. In order of theft numbers, August, July, and September 2018 saw the highest number of thefts nationwide. Meanwhile, February 2018 saw just about half as many thefts as in those hotter summer months. Presumably, this is not only because more bikes are out and about during warmer months, but also because it’s easier to both ride and abscond with bikes when there isn’t ice on the ground to thwart your efforts.

The report also gives a state-by-state breakdown, and notes that thefts are more common in large metropolitan areas as well—which makes sense, given the higher population density and likely larger number of bikes that thieves can steal. By manufacturer, Hondas were the most stolen bike, followed by Yamahas, Suzukis, and Kawasakis.

It will probably also not surprise you to learn that California leads the country in motorcycle thefts, with 7,035 occurring in 2018. The next highest state by numbers was Florida, with 4,279 thefts reported. Despite this number being so high in California, it’s worth noting that it still has decreased since 2017, when 7,537 bikes were stolen. Downward progress is still good, but it clearly has a long way to go.

The report also gives some key statistics on motorcycle recoveries throughout the country. Frustratingly, it gives zero information about what state any of these bikes were in when they were recovered, so we have no way of knowing how damaged and/or rideable they were. Still, in 2018, a total of 16,261 bikes were recovered from thieves. California also leads the way in this category, as well, with 3,467 of the total recoveries taking place within the golden state.

All graphs courtesy of the National Insurance Crime Bureau