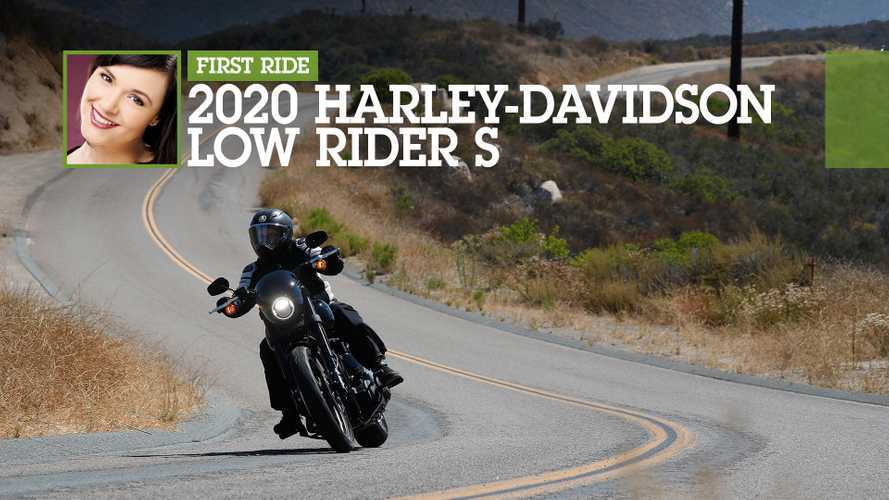 The year was 2017. After a short but successful stint on the market, the Harley-Davidson Low Rider S was pulled from the market almost as quickly as it had been introduced. The decision didn’t stem from a lack of success. On the contrary, buyers liked the power cruiser and its sporty stance (at least sporty by Harley-Davidson's standards). No, something else was in the works: an entirely new platform.

In 2018, the Motor Company launched its new and improved line of cruisers, built on an equally new platform. Hence were introduced the new Softails. Just like with the prior Dyna platform, Harley banked on customization to garnish the lineup—same chassis, same engine, different bits, and different parts to give each model a bit of a unique flavor.

The introduction of the newly developed chassis gave the enthusiasts hope that the Low Rider S would shortly follow. Two years later, the S is finally making a comeback. I asked the people at Harley whether the plan was to revive the model on the new Softail platform from the moment it was pulled from the lineup or if there was a more methodical process behind it.

They explained that it all happened organically. It wasn’t a specific plan, it was just part of things they knew they were going to do—which also explains why it took Harley two years to reintroduce it. The Low Rider S was a good seller on the Dyna platform, so bringing it back simply made sense. It was all a matter of getting to it.

The returning S uses the same Milwaukee-Eight 114 as its Softail brothers. The look is what Harley refers to as “West Coast style”, a design that “points to the future while also looking at the past”. The coastal styling includes a straight, one-inch motocross handlebar, a headlight cowl, a solo seat, and a vintage-looking Harley logo decorating the 5-gallon tank. The company opted for a blacked-out style, complemented with a few dark bronze accents, including the striking 19 and 16-inch wheels that nicely contrast the otherwise dark figure.

I'll be upfront: the former Dyna and I never met. As I admitted last week, attending the launch of the returning model was also my first formal contact with the brand’s products. I have to look at this bike as a standalone rather than compare it with its previous generation. Here are my rookie thoughts about the Low Rider S.

While the cruiser look usually does very little to get me excited, I have to admit that the model has a presence when you walk up to it. The lines are elegant and pleasing to the eye and the choice of blacked-out features over the usual Harley chrome extravaganza elevate the model’s look. That's when I started getting excited about taking it out for a ride. I didn't know what to expect, but I was excited.

Once I jump in the saddle, I notice the first element of the Low Rider’s design that went straight to my "Not a fan" list and that's the aesthetic decision to position the gauges on the gas tank. The Low Rider S isn’t the only Softail to feature the tank-mounted gauges cluster and frankly, I don’t understand the reasoning behind it. (It's a history/tradition thing. -JM)

We asked the folks at Harley about that choice and they answered that this apparently is a feature of the previous generation buyers were not willing to let go of. The designers (lead by Dais Nagao) decided to bank on a clean, clutter-free design.

I get it, we all know that change at Harley’s is a process. That being said, placing these rather important tools below the natural sightline is problematic in my book—pretty or not. Instead of being able to quickly and efficiently peek down at my speedometer, I had to tilt my head completely and take my eyes off the road for far longer than I’m used to while riding, especially with my helmet's chin piece in the way.

Another detail that left me scratching my head as a Harley rookie is the separate switches for the blinkers. Instead of the usual left-hand side toggle, left and right blinkers are separated and activated by the respective hand. While the left hand is used to the motion, trying to activate the right blinker while maintaining the throttle requires a bit more gymnastics.

The solo saddle: the seat of the sociopaths.

Once I got used to these quirks, I found myself sitting comfortably in the Low Rider’s solo saddle. I’m used to a much sportier stance, with the feet usually positioned underneath me, so kicking the feet forward was something entirely new and a bit alien, but nothing I couldn't get used to.

Once I stopped trying to fold my legs under my seat to find the footpegs, I found the riding position to be rather comfortable. Compared to the type of bike I usually travel on, an entire day of cruising didn’t feel so tiring. The motocross handlebar positions the hands straightforward, a bit wider than shoulder apart and the low-set pegs create an 80-degree bend in the knees (not quite 90). This position made me feel very much in control and made flicking the bike in the bends easy and organic.

Look, that's me being comfortable and stuff.

Honestly, my expectations of how this first contact was going to unfold were far exceeded. I thought I would have to deal with a heavy and stubborn bike, a concern the Low Rider quickly put to rest. It was easy to maneuver and sure-footed in the corners, which made me confident enough to carve the mountains roads at good angles, to the point of dragging the pegs. The bike steadily followed my lead, held my lines, and peacefully rocked from side to side to the rhythm of my drum.

The suspension setting is on the stiffer side so I felt both very connected to the road and tossed around on rougher surfaces. As for the braking, the back set up lacks a bit of grip in my opinion. The angle I had to contort my right foot to reach the back brake lever already felt weird—combined with the fact that I needed to aggressively press down to get the bike to slow down lead me to engage the front brake a lot more to compensate.

Harley has built quite the reputation for the sound of its Milwaukee-Eight, but also for its shimmy at idle. It’s quite impressive to sit there and watch the entire handlebar violently shake to the rhythm of the thumping of the engine.

At idle, the vibration was easy to handle, but as soon as I started revving the engine, after roughly 20 minutes in the saddle, my hands already started going numb. I wasn’t off to a very good start—the day was still young and I had a few hours of riding ahead of me. My workaround was to keep the engine running at a lower regime, around the 2,000 rpm mark, which meant being a gear above what the cruising speed required.

I fully expected to have a to deal with a protesting engine constantly on the verge of choking, but once again, the Low Rider proved me wrong—definitely the theme of the day. Even at low revolutions, the engine comfortably cruised along and when I needed to twist the throttle to pick up the pace, power was right there waiting for me without producing as much as a cough.

By the end of the day, the otherwise comfortable solo seat started to feel a bit hard on the tush, something I didn’t experience in the saddle of the tourers. That being said, the strain came a lot later in the day than the adventurers and sportsers I usually like to whip around.

The 2020 Harley-Davidson Low Rider S has a lot of character and while I never got to properly meet the Dyna, I think this Softail should make the purists happy. According to Harley, this new-gen cruiser is better than its predecessor in more ways than one, so what’s not to like? For my part, I think this was a great introduction to Harley-Davidson and a delightful bike to get my kickstart my relation with the Orange and Black with. It wasn’t enough to turn me to the cruiser side, but I’m glad the bike proved some of my preconceived ideas wrong. I like being surprised.