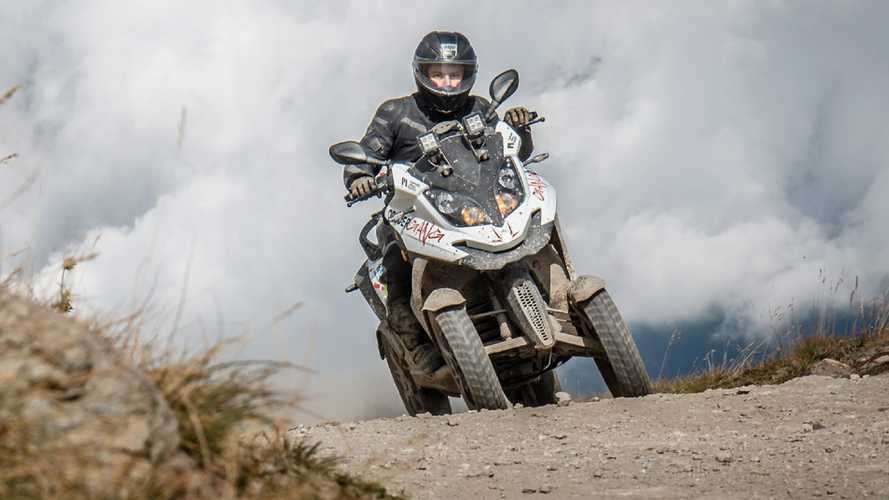 We live in interesting times. The sudden rash of motorcycles with too many wheels has put us in a slightly sticky position here at RideApart, and this new machine takes things to a new level.

This GSX-R1000-Powered Quadzilla Is King Of The Monsters

Is it a car? Is it an ATV? Is it a motorbike? Well, no. It is not. Quadro Vehicles S.A’s Qooder does lean, and you sit atop it and ride it like a motorbike—so technically we can cover it here on RideApart.com. Besides, Monty Python taught me that if it leans like a duck, and it accelerates like a duck, then it must be a witch. Right?

The Swiss were responsible for holes in cheese, extra tools on knives, and LSD—so the Qooder is really just a natural extension of that work. It’s quirky, and apparently Europe loves them. The company already sold 2,000 of its four-wheeled quadrocycle flagship last year, and 4,000 units overall. They also make a three-wheeler, which is reminiscent of a smaller Yamaha Niken GT, with two wheels up front and one out back.

Underpinning this bizarre looking machine is a unique Hydraulic Tilting System that allows all four wheels to tilt in the same direction. It’s very similar tech to the aforementioned Niken, which we’re told maximises grip by adding rubber to the road and offering up additional support. By that logic, the Qooder should be a hoot to ride. The brand makes a street-focused version, and a rugged all-terrain model, called the xQooder.

A 399cc single-cylinder engine good for 32.5 horsepower and 28 pound feet of torque sends power simultaneously to both rear wheels via an integrated differential and an automatic continuously variable transmission (CVT). The four 110/80 x 14 inch wheels can tilt simultaneously, and also articulate independently for rock crawling and rough terrain – though how the tilt function works when your wheels are at different heights remains to be seen.

Those output figures are low, and smaller still when you consider the Qooder’s 620 lb curb weight. Motorcycle riders will probably be surprised by the brakes too, with the same 240 mm disks front and back—four in total, of course.

The Qooder looks like it would be spooky to ride, but that’s half the fun of all these new products. This bike might be an option for people with mobility limitations, and could help open our sport to a new crop of riders and enthusiasts.

It would be easy to scoff at a motorbike with four wheels, but our industry has always been one that’s willing to probe new and interesting ideas.

The Swiss brand clearly hopes to make an impact in North America.

“The United States is the single most important market in the world, and we are ready to bring our innovative, fun and groundbreaking mobility solutions to a new audience,” said Quadro Vehicles CEO Paolo Gagliardo.

Whether or not we’re ready for something quite this unusual remains to me seen. At the very least, the Qooder would make for an entertaining spec-racing series.