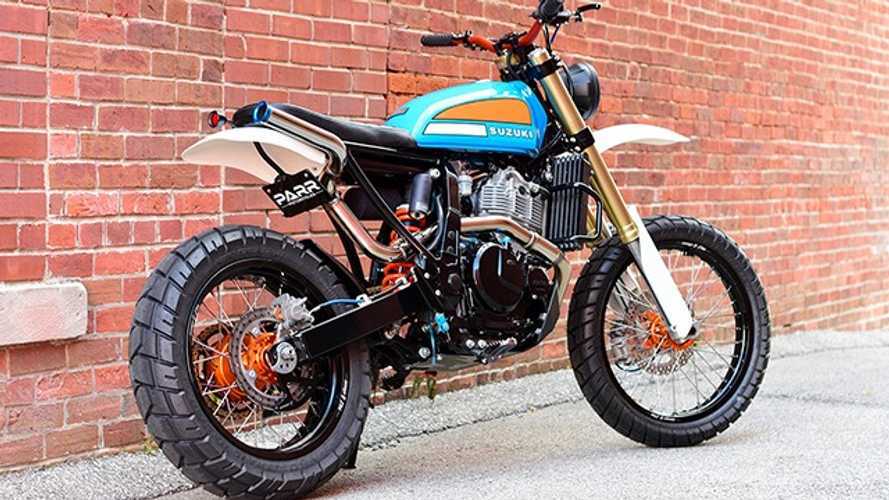 Suzuki’s DR650 has been around the block. With 30 years of production under its belt, the big dual sport has developed a committed community of riders and amassed an extensive aftermarket catalog. From post-apocalyptic enduros to sleek cafe racers, owners have customized the DR to suit their particular needs in a variety of ways. Spencer Parr of Parr Motorcycles, a one-man shop based out of a garage in Avon, Indiana, is no stranger to the DR650. He previously rebuilt a 2003 model as a supermoto with styling points from Suzuki’s legendary RM400. This time around, Parr decided to turn the DR into something different—an urban scrambler.

Starting with a 2012 DR650, Parr applied the same ethos as his previous build and fused modern performance with retro styling.

“I already knew going into the build I was going to make an urban scrambler that was easy to ride but performed at the highest level,” said Parr.

First, he tore down the DR and rebuilt the subframe. The lower seating position served the scrambler aesthetic and achieved the level lines of a bygone era. Parr also hid the electronics under the seat pan which streamlined the rear of the big thumper.

An inverted front end from a 2007 RMZ450 with Racetech springs replaced the stock fork and a Scott’s steering damper added stable handling. A Cogent monoshock with a Racetech spring also provided updated suspension out back.

With fewer than 3,000 miles on the clock, the 644cc single-cylinder engine didn’t need any internal work, but Parr addressed a lean fueling issue with a Keihin FCR39 carburetor. For improved airflow, he fabricated a polished header pipe that weaved through the frame and exited at the top of the rear fender, parallel to the nostalgic tail light.

“Since retro builds seem to be my thing, the design concept for this bike comes from a ‘70s Suzuki TS,” noted Parr.

The TS series was Suzuki’s first dual sport lineup offered to the mass market and its graphics served as the perfect inspiration for the build. Influenced by the paint job of the ‘73-'75 TS, Parr applied a blue, orange, and white color scheme to a ‘78 TS250 gas tank he sourced from Canada. A tuck-n-roll leather seat with blue stitching and the trimmed white fenders added a period-correct touch.

Though Parr emphasized classic design with the build, the LED headlight and turn signals helped bring the DR into the present day. A Motogadget mini gauge mounted to BRP risers also furnished the build with modern conveniences.

Parr finished off the DR with Shinko 705 tires spooned onto Warp 9 Racing wheels. The big 19” front and 17” rear produced a proper scrambler stance.

Just like the DR650, Parr’s creation drew from the past but it didn’t stop him from looking to the future. Yes, the DR has been around the block but that doesn’t mean it can’t keep up.