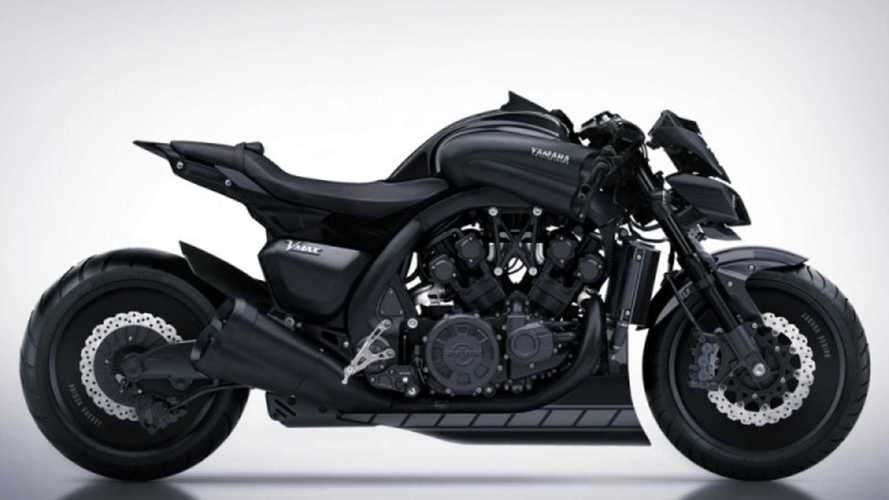 Yes, it comes in black.

Introduced in 1985, Yamaha’s V-Max is a legend in the motorcycling world. The V4 engine, shaft drive, and futuristic styling positioned the V-Max as the performance alternative within cruiser circles. In 2009, the company reintroduced the model as the VMAX and equipped it with an updated 1,679cc, 65-degree engine. While Yamaha continued to improve the bike’s performance with features like ride-by-wire, the VMAX’s aesthetics haven’t received attention in the past decade. The design feels particularly dated when compared to the likes of the Ducati Diavel and Triumph Rocket 3, two models that have dominated muscle cruiser headlines in the past few years. With public tastes shifting, Hungary-based Jakusa Designs re-envisioned the original power cruiser for a new generation.

We Just Want To Pump You Up:

The Biggest Production Bike Engine Is About To Get Beefier

To add more “sport” to the “Sport Heritage” VMAX, Jakusa appropriated parts of Yamaha’s MT-10. The bug-eyed dual headlight is the most noticeable component borrowed from the super naked. Coupled with the dorsal fin on the VMAX’s gas tank, the anatomical element imbued the concept with a predatory appearance.

The MT-10 influence doesn’t stop at the head of the bike though. Jakusa removed the VMAX’s dovetail fender and replaced it with a sport-inspired tail section. The resulting shape mimicked the sleek, streamlined forms of the Diavel and new Rocket 3 and contemporized the silhouette of the cruiser.

To add visual weight to the lower half of the frame, Jakusa employed a chin spoiler to shroud the massive dual-radiator configuration and wheel covers to simplify the wavy cutouts of the stock mags.

Due to the numerous aesthetic changes, Jakusa had to address the rider position as well. The design firm added a dose of sport aggro to the ergos with clip-ons, rear-set pegs, and a raised seating position. We’re not sure if you would want to rest your chest on the tank with that dorsal fin pointed directly at your sternum, but at least you’ll look good doing it.

With the aggressive stance, blacked-out cosmetics, and animalistic features, one could easily imagine this concept as the next Batcycle. We just hope Yamaha takes note and brings the VMAX into the next decade in a similar fashion.