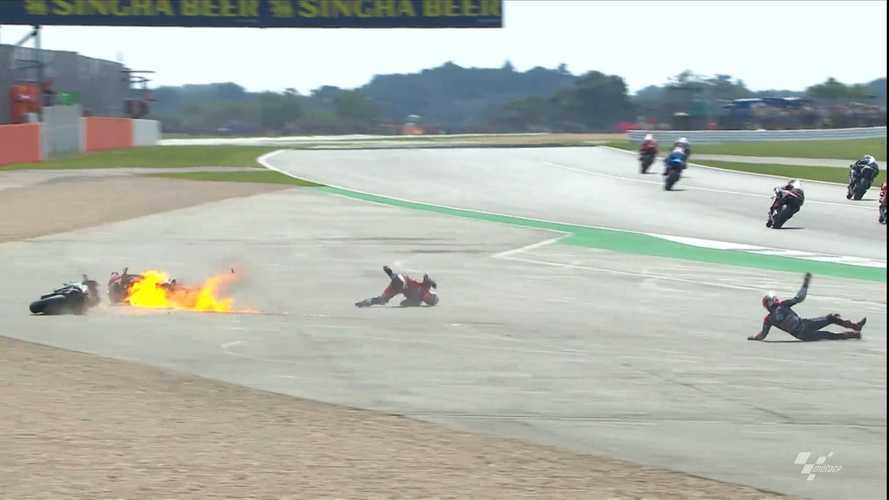 Both riders were OK, but what a moment!

Watching the 2019 MotoGP round at Silverstone from the start, with no spoilers before you saw it, you could be forgiven for thinking it was just going to be the Marc Márquez Show. After all, he was doing two things he excels at: starting from pole, and getting a blazing fast start from that position. However, it was a first-lap race incident involving Fabio Quatararo and Andrea Dovizioso that was the first big moment in this race.

Stuff To Look Forward To:

Dainese Gets You Close To MotoGP Racing Action At Misano

If you simply spectated, all you saw was Quatararo’s Petronas Yamaha SRT going down in a high side, and of course Quatararo flying. Then, you saw Dovi’s Mission Winnow Ducati having absolutely nowhere to go, launching up over Quatararo’s bike, sliding away, and bursting into flames as Dovi also flew and landed hard—but at least, thankfully far from the flaming wreckage of his bike.

Replays of the incident in slow-mo from a few different angles were part of the official MotoGP race broadcast, so you could clearly see Quatararo’s bike cause the crash. There was truly nothing Dovi could have done differently, which sucks, but it’s also racing. You can watch video of the incident from all angles on the MotoGP website for free, but you have to be a registered user to watch.

As a result, Dovi was taken away on a stretcher for medical checks, and Quatararo caught a ride back to the pits on the back of someone’s pit bike. Ducati team manager Davide Tardozzi later made an official announcement that Dovi seemed to have a concussion, and had lost his memory for about 15 to 20 minutes following the incident. He also had pain in his hip where he landed, but nothing was broken.

Dovi was kept in the hospital for observation overnight, but was sent home the next day and thankfully, seems to be fine. He’s hoping to be back to race fitness for Misano testing, which runs August 29 through 30, 2019.

In a video that MotoGP later posted to its website (again, free but behind a registration wall), Fabio Quatararo explained what happened during that crash. He said that Alex Rins got a slightly better start than he did, but made a mistake. In trying to avoid hitting Rins, Quatararo made what turned out to be the mistake that took both him and Dovi out of the race at Silverstone. His exact words were that he “shut the throttle a bit too aggressively to not go into him and I make a big slide.”

Thankfully, both riders seem to be OK and hopefully will be able to test at Misano later this week. That racing incident and a very dramatic finish that saw Alex Rins snap a race win from Marc Márquez by just 0.013 seconds will seal the 2019 Silverstone MotoGP round in fans’ memories, for sure.