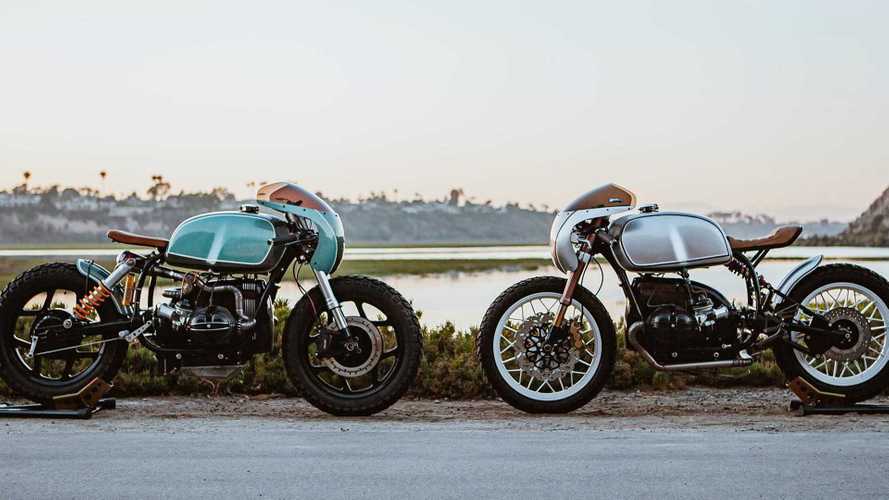 Which one do you want?

If you want something done right—whatever that means to you—sometimes, the best option is to do it yourself. Feast your eyes upon the glories of these twin BMW R100 cafe racers from California’s Upcycle Garage. UG is the name for a business that currently consists of just one visionary, Johnny Nguyen—but perhaps it’s because of that fact that his vision is crystal clear in this pair of R100s.

The Gallinella Is An Elegant Bathtub Fairing Custom Interceptor 650

When Nguyen got his hands on these two R100s at the same time, he decided they were fraternal twins at heart rather than identical ones. As he told Bike EXIF, “it became my mission to make them ‘look the same, but different.’”

Although they’re both R100s, they’re of slightly different vintages: the brown and silver one is a 1982 R100RS, while the green one came from the factory later, and is a 1988 R100RT. You can read an excellent interview with Nguyen, as well as find full build details at Bike EXIF.

Nguyen’s resulting builds bear an unmistakable family resemblance to one another—but still, each retains its own individuality. In these subtly gleaming colors, the R90S quarter fairings from AirTech Streamlining with custom headlight additions from Upcycle remind me quite a bit of Tetsujin from the Tekken video game series. That’s by no means a bad thing. He is, after all, a fierce and understated fighter—which is exactly how these two bikes look, as well.

Custom builds are frequently exciting because they show us something new, and hopefully also that we haven’t seen before. My favorites are typically the ones that are difficult to place in any one period of time, and that seem to belong to a timestream all their own. Ones that appear as though they’re visiting us from another dimension, examples of what could have been on a divergent timeline—ones that seem both classic and modern at the same time.

These two tick those boxes nicely, and for me, there’s just something about that boxer engine, as well. I’m fully aware that these are personal preferences—but isn’t that what all of this is about, anyway?