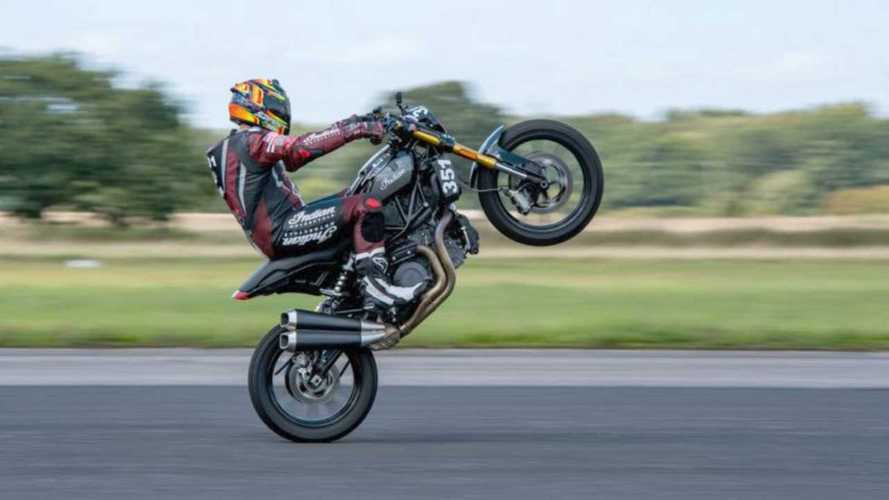 Ripping dank wheelies for the win!

Among motorcyclists, wheelies are one of the most celebrated maneuvers anyone can perform. From clutch-ups to power wheelies, from stunters to racers, no one can resist the allure of lifting the front wheel off the tarmac. Held annually in York, England, the Straightliners World Wheelie Championship celebrates the slam dunk of motorcycling by assembling 30 top competitors from around the world to vie for the title. Contestants ride a kilometer-long wheelie, and the fastest rider wins the crown. Indian Motorcycle entered the FTR 1200 in the competition to test the wheelie mettle of their new prizefighter and it didn’t disappoint.

You Have Much To Learn, Grasshopper:

How To Pop A Proper Wheelie?

It seems like the FTR 1200 PR machine never ceases to pick up steam. From a slew of positive reviews—including our own—and rapturous public reception, the flat track-inspired roadster continues to make headlines. On August 17, 2019, the team installed another chapter in the FTR storybook by setting two UK production bike speed records in the Production V-Twin (up to 1350cc) category at the World Wheelie Championships.

Recapping the event, Myers commented, “This has been a really positive introduction to the FTR. The bike was pretty much standard compared to everything else out there this weekend, so to set the speeds I did shows how much potential there is.”

Coming from a guy that won the 2018 Wheelie Championships with a 206 mph 1 kilometer-run, the praise carries much weight. The team entered a stock FTR1200S into the contest, and among the turbo-charged machines that can exceed 210 mph on one wheel, Indian felt the new naked held its own.

“The balance of the bike is really good, but I was most impressed by the engine,” said Myers. “Its torque is really impressive and within just a couple of passes I was super comfortable with it.”

If you’re one for ripping dank whoolies or hitting 12 o’clock on your bike, it seems like Indian is pitching the FTR directly at you. Only time will tell if Indian’s FTR parade slows down anytime soon, but for now, it seems like they’re content to lean back and ride it out.

A tentative first outing at the Straightliners-run event that sees an eclectic mix of machines enter, including turbo charged machines that reach over 210mph on the back wheel, Bubba’s FTR 1200S was simply a production machine with the rear number plate hanger removed.

With a limited number of runs, due to other commitments for Bubba on his regular turbo-charged machine, the 2018 world champion completed his fastest 1 Mile Wheelie at 131.137mph on the FTR1200S, before going on to set two UK speed records in the process, recording a speed of 145.543mph to set the ‘Flying Start ¼ mile’ record and 145.613mph to secure the ‘Standing Start Mile’ record too – both in the production V-Twin up to 1350cc category.

Talking about the weekend, Bubba Myers, commented, “This has been a really positive introduction to the FTR. The bike was pretty much standard compared to everything else out there this weekend, so to set the speeds I did shows how much potential there is. The balance of the bike is really good, but I was most impressed by the engine; Its torque is really impressive and within just a couple of passes I was super comfortable with it. We’re pleased to begin the FTR’s story with some records in the bag too. A big thanks to Indian Motorcycle Company for the support, I hope we’re back next year.”

ABOUT THE WORLD WHEELIE CHAMPIONSHIPS

Riding on the back wheel for a kilometre at over 200mph is the goal of motorcycles bidding to be the wheelie world champion. This can be seen over and over again at the Straightliners Motorcycle World Wheelie Championship which takes place in England in mid-August. Up to 30 top competitors from the USA, UK, France, Holland and Ireland compete for the world title.

ABOUT INDIAN MOTORCYCLE
Indian Motorcycle, a wholly owned subsidiary of Polaris Industries Inc. (NYSE: PII), is America’s first motorcycle company. Founded in 1901, Indian Motorcycle has won the hearts of motorcyclists around the world and earned distinction as one of America’s most legendary and iconic brands through unrivalled racing dominance, engineering prowess and countless innovations and industry firsts. Today that heritage and passion is reignited under new brand stewardship. To learn more, please visit www.indianmotorcycle-intl.eu/select-country/