This Strange Homemade Electric Bike Was Pulled Over On The Highway 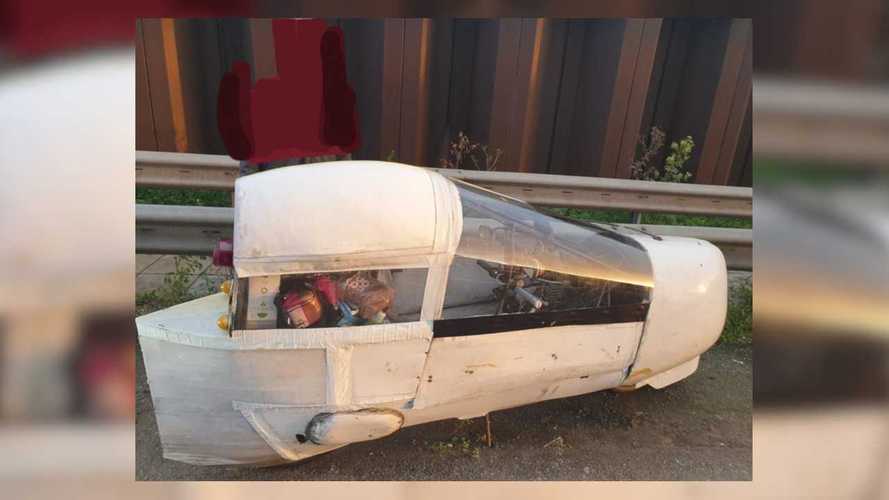 When you see police lights in your mirror, there are certain things you expect. Maybe you’re perfectly aware that you were speeding. Perhaps you just saw some idiot pull a truly boneheaded (and illegal) move in traffic and you’re sure that you’re about to see them get theirs. No matter what you’re thinking, one thing you probably don’t expect is for the culprit to be a strange-looking homemade electric motorcycle.

The BBC reported that a traffic officer stopped one such shed-built bike on the M25. It was near junction 21 for the M1 in Hertfordshire late in the evening on Sunday, August 18, 2019. The police officer found the event so weird, he tweeted about it after the fact.

His tweet read, “The most unusual vehicle I’ve stopped on a motorway in my 26 years! All checked and in order, although still not convinced I know what it is.”

Commenters, of course, began asking questions and offering suggestions. Some thought it resembled an old Messerschmitt three-wheeler from back in the day, while at least one other person said it put them in mind of the Quasar covered motorcycle from the ‘80s. One person thought they spotted running gear inside the home-built bike from an Invacar.

Going simply by a few exterior shots posted online, it’s impossible to say with accuracy what’s under all that duct tape and wood. What we do know is that, whatever it is, it’s apparently road-legal the way the owner is riding it.

Sergeant Stephen Andrews of the Bedfordshire, Cambridgeshire, and Hertfordshire Roads Policing Unit told the BBC, “The vehicle was keeping up with other traffic and didn’t cause any obstruction to other road users. The owner made sure that he fulfilled all the safety regulations as well as keeping the insurance, MOT, and tax in date.”

Next time you get discouraged about a build you’re working on, think about the guy who built this, and take it as an inspiration. He built a road-worthy electric bike, one that he’s happy to ride out in the world—and so can you. In the end, you do stuff with bikes because they make you happy—not because you’re waiting around to hear what everyone else thinks, right? Right. Let’s get weird.