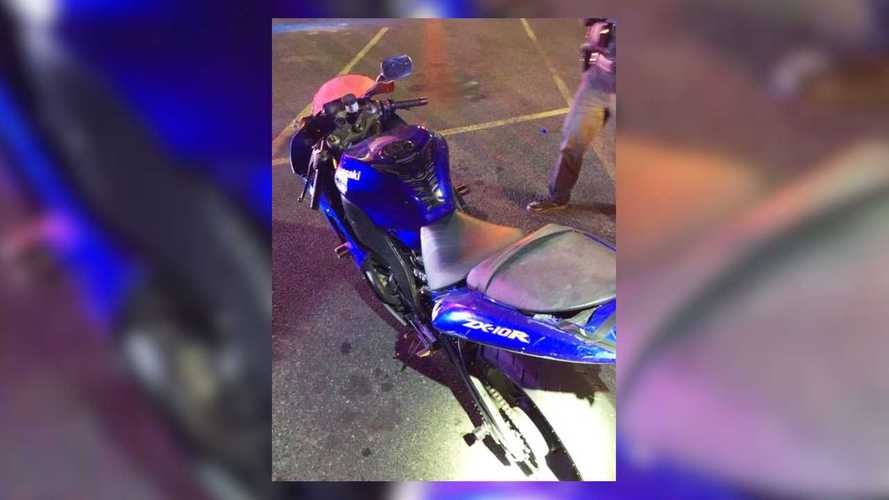 The mystery deepens: Did the guy really steal it, or is he just an idiot?

Stories of bike theft are sadly all too common. Even more frustratingly, they often don’t end with the bike’s owner getting it back in the same condition it was in when stolen—if they get it back at all. If you’re particularly attached to a specific bike, that’s the part that truly sucks.

That’s why this story about two good friends laying a clever trap for a motorcycle thief is so satisfying. The story goes like this: In early August, 2019, the owner of a 2004 Kawasaki ZX10R reported it stolen to police in Portland, Oregon.

Ever since the theft, he kept a close eye on local online classifieds, just in case his bike showed up. When he saw it listed for sale in the nearby Tri-Cities Facebook Marketplace listings—which covers Kennewick, Pasco, and Lincoln, Washington—he knew what he had to do. The listing mentioned that there was no title, but that the seller had applied for it and it would be sent to whoever bought the bike in the mail.

Since the bike was registered in the real owner’s name, that owner got his friend to contact the FB seller to arrange a meetup to buy the bike. The two friends worked together, and arranged to meet the thief in the parking lot of a Pasco Walmart. According to Pasco police, the friends arrived early, called the Pasco PD to let them know what they were doing—and waited for the thief to arrive.

Soon enough, the guy rolled up on a blue ZX10R, which was quickly verified as actually being the stolen bike in question. The only thing the thief had changed was the license plate. Pasco police arrested and booked the thief for an investigative hold on Possession of a Stolen Vehicle. Police also mentioned that he could face a charge of Trafficking in Stolen Property.

Delving into the Facebook comments on the Pasco PD’s post about this incident yielded one thread of possible interest. A commenter who claimed to be friends with the accused thief (remember, he hasn’t been convicted) also claimed that his friend was not, in fact, a thief. Instead, he said that his friend had traded an RX7 for the ZX10R and “got screwed over by some punk in Portland.”

This supposed friend claimed that the alleged thief neither stole the bike, nor knew that it was stolen when he tried to sell it. In response to this thread, the Pasco Police wrote, “We are reporting an arrest based on probable cause. That is a lower standard than proof beyond a reasonable doubt, which would be required for a jury to convict. He is presumed innocent until proven guilty in a court of law (not Facebook). We are not reporting all available info in an active case; we are just reporting a felony arrest.”

If what the alleged thief’s friend posted is true, it’s a pretty stupid situation on his part—but definitely not on the part of the ZX10R’s owner and his buddy, who are no doubt relieved that the bike is home safe now.

Pasco Police are looking for any additional information they can get regarding this matter. They wrote, “Anyone with additional info about this case is urged to call Dispatch at (509)628-0333 or email Officer Andrew Taylor about case PP19-25452 PSV.”