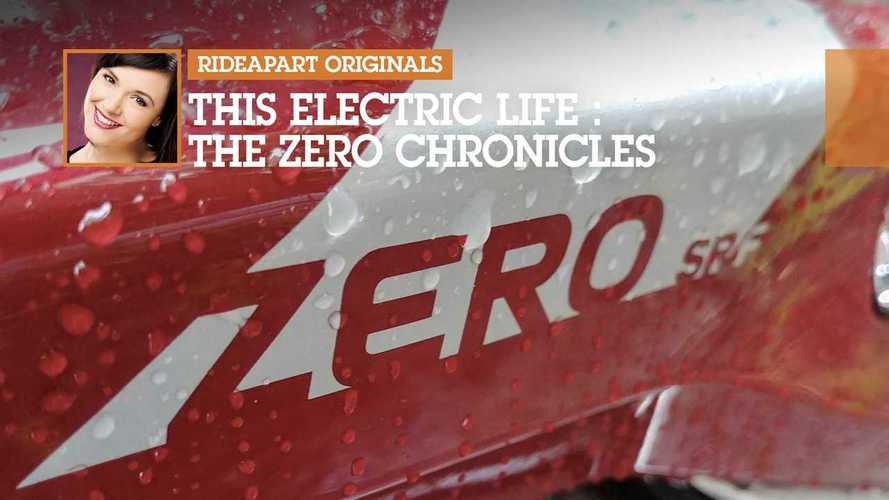 Episode 3 and a half.

Like everything that goes up has to come down, a round-trip usually includes a return trip to homebase. Or else it’s not a round trip. Logical. Here’s the second part of my long-distance adventure on the 2020 Zero SR/F.

If you haven’t read the first part yet, I highly recommend the logical order, but hey! You do you. During the two days that followed my tardy arrival in Montreal, I mentally prepared myself for the return home. Try to relax knowing that you'll have to face the worst idea you've had for the past decade all over again. I dare you. I double dare you.

At least, this time around, I had two very clear advantages facing this mountains a second time (or what felt like a mountain)—I knew what to expect and I knew what range I was able to achieve with the bike. Armed with the new power of knowledge, I planned the return trip home. To shake things up a bit and see how the range would be affected, I decided to avoid the highway altogether and opted instead to make my way back on the sideroads. It is a much slower pace than on the highway, but you also use a lot less energy.

I left early on the Sunday morning with a fully charged and fully loaded bike, ready to go. I had suffered a lot more than the Zero had during the first half of the journey. Aside from some mud stains from a short stint in the wet gravel, the Zero was looking as fresh as the day it was delivered to me.

I reluctantly jumped in the saddle and started on what was going to be another long day and journey. The weather had cleared out so I had that going for me. No more playing cat and mouse with thunderstorms, the sun was out and it was going to be a glorious day.

I traveled 69 miles to reach the St. Zotique Town Hall, near the Ontario border and where I found my first charging station of the day. With still roughly 50% of energy left, it meant the bike only needed an hour or so to charge, just enough time to sit in the sun and enjoy a break and a snack.

So far, the pace was much more enjoyable and tolerable than the highway. While it took me two hours instead of one to get there, I was feeling the zen. Ohm. Get it?

Back on the Zero, the next pit stop I picked was the same as on the way in, in Brockville, right by the St. Lawrence river. The 89-mile leg took maybe 2:20 to complete, but once again, I parked and plugged the bike with 20% of the previous charge left, which meant only 1:45 to wait to top it off. Stop number two and still going strong—it wasn’t that bad after all.

In the late afternoon, I reached my “randomly located station” of the day: a racetrack. With 85 miles added to the counter in 3 hours, I was pretty pleased with how much more time I spent in the saddle and how much less time I spent waiting around. So far, the longer traveling hours had been a good tradeoff.

My pit stop at the track could have been epic. I had checked the schedule and there was drag racing and drifting on the menu that day. The only problem? I showed up too late. So it was just me and my Zero standing there while all the pickup trucks hauling their trailers were heading out.

While I technically should have waited 1.5 hours for a charge, having landed at the racetrack with 26% battery left, but I settled for an hour or so, enough to get up to an 85-mile range. The next leg was the shortest of the day so I didn’t need to wait for a full charge. Nor did I want to. I would be hanging out with a friend at the next stop, so I didn’t mind the next charge taking more time—time flies when you’re in good company. Plus, the sun had started to set and memories of the cold from the previous journey were haunting me.

I made it to my last stop of the day at around 9pm that night. At that point, I had been traveling for 13 hours. I was becoming exhausted, but I wasn’t nearly as miserable as I was on the previous Thursday. The bike needed another 1.5 hour of charging after a quick 60-miles trip (remember that I didn’t wait for a full charge the previous stop).

As I plugged the bike in and started shedding my gear, a good friend of mine, senior editor at Canada Moto Guide, met me at the charging station and welcomed me, laughing. I had spoken with him on the phone earlier and told him about the mess I had gotten myself into, so he knew of my suffering and welcomed it with humor. Oh, those Brits.

We drove back to his house (in a car this time) where I was warmly welcomed into his home with a lovely cuppa. As I sat there slowly sinking into the couch under the weight of the day, his earlier invitation to crash and wrap up the trip the following morning was becoming increasingly sexy. I wouldn’t have to go back out there where it was (relatively) cold and dark. By then, I only had 84 miles left to travel but with another hour or so to wait for the bike to charge followed by close to two hours of commute, I was going to make it there at midnight once more.

For once, my ego agreed with my reason and it was decided: I would sleep over and start again bright and early on Monday morning. My friend and his wife were gracious hosts for the night and a little before 7am the following morning, I was back with a full-stocked Zero and rest enough to tackle the last leg of this nightmarish trip.

I made it home with yet another 20% charge left—and this time, no fiddling around on cute sideroads. I was fed up and wanted to get there fast, so I took the highway and cruised at the usual 60 mph. Regen in the traffic was tremendously helpful in maintaining the battery, until I landed in my driveway.

Finally! After close to two hours in the saddle because of rush hour traffic, I swung my leg off the Zero, turned my back on it and haven’t looked at it since. I remember looking at the counter when it turned to 1755 miles—the 800-mile mark. I had left the previous Thursday morning with 955 at the odometer. I was now certainly older, possibly wiser, and definitely more tired than I was then.

My lack of preparation for this trip is what made it so difficult—I take all the blame. The bike itself had very little to do with my misery—the numbers given by Zero in terms of range are pretty much what I observed. I would say only the charging times were deceptively off by 30 minutes to an hour.  As I stated in part 1, this bike hasn’t been designed for long-distance travel, so there’s very little I can actually pin on it—I knew what I was getting myself into, I just didn’t realize how big the commitment was going to be.

You live, you learn.

The return journey, scenario number two, is the clear winner for me. The whole trip took me 16 hours to complete (so less than the journey on the highway). I was reaching the charging stations with a lot more autonomy left, which meant shorter charging times. Of course, the road itself was more interesting and dynamic to ride on.

Granted, the same distance was traveled at a slower pace on the journey home, but it was ultimately the more enjoyable of the two trips.

What I Did Wrong

SO MANY THINGS. Nah, I’m just being dramatic. I didn’t mess everything up. Just a few things. See, I underestimated the trip simply because I’ve done this back and forth so many times by car, train, plane, and even by motorcycle that I thought it was just going to be another walk in the park. With family in the Belle Province, I’m close to knowing that portion of highway 401 like the palm of my hand. Obviously, inserting the electric motorcycle element into this equation turns the trip into a completely different experience. I suspected it, but didn’t realize just how true and how vastly different it would be.

First thing I should have done is test the Level 2 charging before leaving. It’s so simple it’s almost stupid. That simple step would have helped me manage my expectations of this trip a whole lot better.

I should have packed better as well. I’m usually so well prepared when it comes to taking motorcycle road trips, but this time, it kind of all went sideways. Again, I was so used to the journey, I got cocky. Long sleeves, even better gear, no “oh I won’t need that!”. This would have required the same quality of preparation and packing I’ve done with any other trip. It would have saved me a lot of grief (and cold).

Finally, truth be told, I should have planned to travel on two days instead of one. Stopping at the midpoint, giving the bike a proper overnight charge and giving myself a chance to get some proper rest. Instead of cramming 17 hours of travel in a day, that would have allowed me to enjoy the process a little more, not feel as rushed, and it likely would have turned this experience completely around.

Considering charging has mostly been free, and finding a small room somewhere in an exotic little town can’t be dramatically expensive, it would have been worth the extra expense.

My Advice To You, Oh Electric Adventurer

Ultimately, doing a road trip on an electric motorcycle isn’t an impossible task to accomplish (don’t punch me!) To avoid my mistakes and keep things as enjoyable as possible, you only need to be a little better prepared than you would be traveling with a gasoline-powered bike.

Plan your stops—there are charging stations everywhere. You will likely have 1.5 to 2 hours to wait, so why not plan to do something while you wait. Find a station that will allow you to have access to something interesting to do.

Don’t be in a rush because if there’s one thing an electric bike isn’t, it’s in a rush. Embrace the fact that traveling 400 miles will take you two days. This is definitely a case of “the destination matters not, it’s the journey there that does”.

Get off the highway and enjoy the roads less traveled—the view will be prettier, the road a lot more engaging, and bonus: you’ll get a better electric range.

I’ve done my part to contribute to this aspect of the discussion on electric motorcycles and I don’t expect to tackle this kind of challenge anytime soon. The rest is for you to discover. In the next episode of the Zero Chronicles, that’s when I’ll get to have all the fun by trying to get an idea of how fast the SR/F does the 0 to 60.