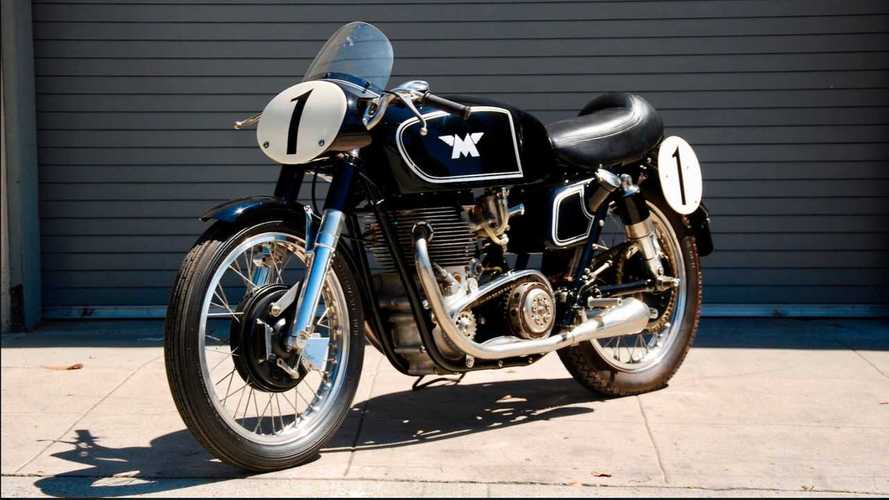 Of the 80 originally made, less than half still exist.

Storied British motorcycle manufacturer Matchless started in London in 1899, and was one of the first British motorcycle brands in existence. Although it no longer exists, it’s still remembered fondly because it produced some truly magical race machines.

Can This Beautifully Restored Crocker Crack A Million At Mecum?

A Matchless motorcycle won the first-ever Isle of Man TT in 1907, raced by a rider named Charlie Collier. As Silodrome wrote, Collier’s brother Harry won in 1909, and then Collier himself won the TT again in 1910—all aboard Matchless bikes. It seemed that this British motorcycle manufacturer wasn’t bragging—its chosen name was simply an honest expression of what those bikes were, at their cores.

Now, a 1955 Matchless G45 is about to cross the auction block at Mecum Monterey this coming Saturday, August 17, 2019. This race version of the G45 was owned—and likely raced—by seven-time South African racing champion Beppe Castellani.

Unfortunately, as Mecum writes, not a lot is known about Castellani other than what the legendary Jim Redman wrote in his autobiography: “For the time being, the most important thing for me was to win the 1957 500cc Championship in South Africa but, unfortunately, I was beaten by Beppe Castellani, the current South African Champion, untouchable at the time.”

This particular bike has been completely restored, and was allegedly intact with all original componentry when it arrived in the US. If you’re the lucky winner and you want to ride it, this bike is completely ready for you to do so.

Around 80 total Matchless G45s were built in total between 1951 and 1957—and of those, fewer than half are known to still exist today. According to Classic British Motorcycles, the G45 was based on the G9 street version, with the latter bike’s cast iron cylinders swapped for alloy barrels and a redesigned cylinder head that had better flow. Additional finning was also added to improve cooling for the race version.

The G45 won the Senior Manx Grand Prix in 1952, which seriously irritated other bike manufacturers because rules forbade factory prototypes entering that race—which this bike seemed to be. In the interest of race homologation, Matchless released the G45 for sale to the public. Nowadays, manufacturers do that sort of thing all the time—but back then, it was a definite novelty.