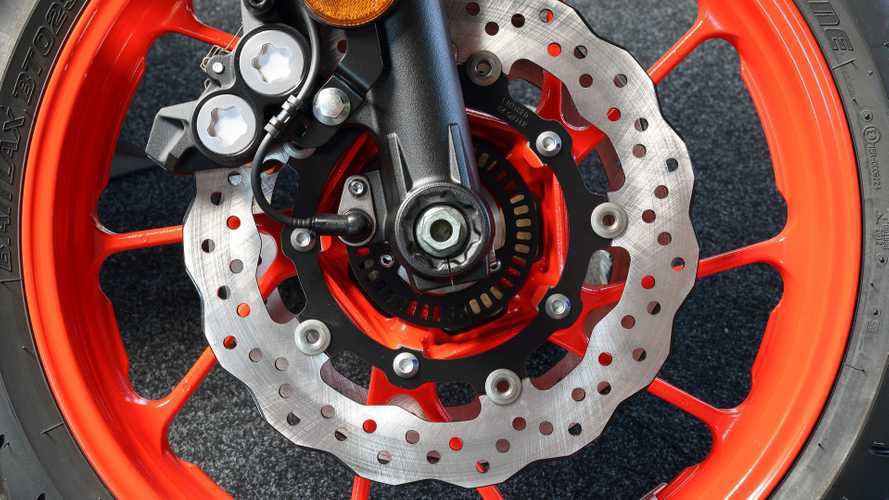 It isn't magic, but it can feel like it is.

This is a great question, and one lots of people will answer with “magic.” First, let’s define these terms. A wheelie is fairly universally known as that fun maneuver during which you (intentionally or unintentionally) lift the motorcycle’s front wheel off the ground on acceleration. A stoppie, also sometimes called an “endo” (I hear that term arose because it is sometimes completed by a “ver-end,” that is, “end-over-end,” if the stoppie isn’t well controlled). Apply the front brake just hard enough, and the rear wheel of the bike will lift up into the air, accomplishing a stoppie.

Keep Those Tires On The Pavement:

How To Use Your Brakes

Some modern, technologically advanced, and often eye-wateringly expensive motorcycles have numerous electronic assistants, among them “anti-wheelie” or “launch control,” and “anti-stoppie” or “rear wheel lift control.” These terms vary by manufacturer, but they all mean the same thing: systems that aim to keep both of your tires in contact with the pavement at all times.

Some of us spent our formative years perfecting wheelies and stoppies. Lots of us have wheelied or stoppied a motorcycle by mistake but played it off like we meant to do that, right? These days, those of us who have been riding older bikes can sometimes be not-so-pleasantly surprised by these electronic nannies, but they are here to help (and to stay) and they’re getting better all the time.

So, how do they work? Computers, of course. First, a bike that has these aids definitely has ABS, and it is the ABS rings on your wheels—and the ABS sensors that read those rings—that feed the relevant information into the bike’s computer. The long and short of it is, the computer knows how fast each wheel is traveling. When there’s a discrepancy between wheel speeds, the computer will cut engine power or activate the ABS, depending on which end of the bike is in the air.

Performing a wheelie on a motorcycle can be fun when you’re doing it intentionally. If you’re riding twisties and roll hard on the throttle only to find that the road drops away into a pretty severe downhill turn and your front wheel isn’t contacting the ground? That can get surprising in a bad way really fast. Some electronic aids can, in bikes with electronic suspension, also sense how loaded that suspension is at any given moment, extrapolate that a wheelie is about to happen, and prevent it before it begins.

You may have (as I have) experienced an early version of an anti-wheelie nanny, perhaps on an unfamiliar bike, perhaps on a highway entrance ramp. You may have brought the front wheel up a touch and felt the bike’s power cut out and slam the front wheel (and you) back onto the pavement in an unpleasant and possibly punitive fashion. That Multistrada and I became friends eventually, I assure you.

Anti-stoppie electronics are generally less dramatic, in that they simply activate the ABS on the front wheel. If the bike has linked brakes, chances are a stoppie never has a chance. In that case, the bike engages the rear brake even if you’re only touching the front.

The good news is, you can often turn all of these controls off, though you’ll never know when they will kick in and save your bacon. If you’re currently playing around with the settings on a new-to-you motorcycle and it has these electronic aids, I recommend getting fully used to the bike with its launch control, traction control, ABS, electronic suspension adjustment and whatever else it will do for you, activated. If you want to practice your wheelies, turn the aids off one by one, and practice in a place where there is no other traffic. Find a parking lot or an abandoned road. Then, get back out onto the road with the electronics engaged. When the bike keeps your wheels on the ground through an otherwise-questionable maneuver, you can tell your friends that the bike’s handling is, in fact, magical, instead of boring them with the nitty-gritty of computer-controlled traction assistance.