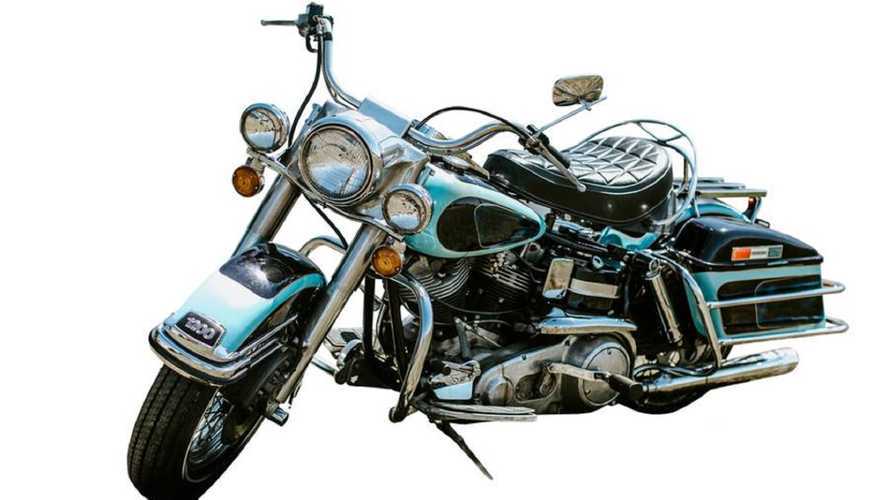 Would you pay $2 Million for the King’s Electra Glide?

You ain’t nothing but a hound dog… you ain’t no motorbike. Maybe we’re mishearing the lyrics, or maybe that song was actually all about Elvis Presley’s 1976 Harley-Davidson FLH 1200 Electra Glide. This Big Hunk O’ Love has been on display at the Pioneer Auto Museum for over three decades but will soon be going under the hammer. The full-dress bike is a fetching black and blue (though not suede) and looks in near perfect condition. GWS Auction says the owner has a video of it running, and also notes that the bike is still titled in Elvis Presley’s name. The ‘Glide has been enclosed in glass for its entire time at the museum.

Auctioneers expect the rig to pull in a record-breaking $1.7-$2 Million—a mark that will send the previous record for most expensive motorcycle ever sold at auction straight to Heartbreak Hotel. The current record belongs to a 1951 Vincent Black Lightning that sold at Bonhams for $929,000 in 2018. That bike helped Aussie Jake Ehret set a 1953 speed record of 141.5 mph in Australia.

There was also the case of the Easy Rider Harley-Davidson, which sold for $1.35 million in 2014. Unfortunately, the buyer was left All Shook Up, after Suspicious Minds found the bike was only a replica, stripping it of its value and its record. The seller avoided doing the Jailhouse Rock.

If you want a piece of The King, and have a cool $2 mil to blow on an old v-twin cruiser, check out the Artifacts of Hollywood and Music auction by GWS Auctions. Souvenir collectors and Hollywood enthusiasts will be Playing for Keeps on August 31.