Watch A Complete Idiot Demonstrate How Not To Lane Split 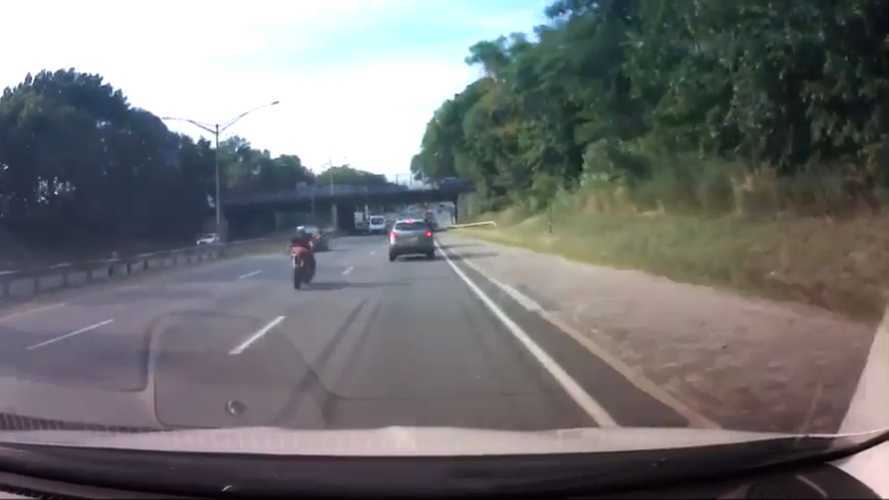 Squid levels up to salmon.

We may not have the grand tradition of dashcam video madness here in the US that Russia has, but occasionally, we have our moments. Check out this video of a motorcyclist demonstrating how not to lane split safely by doing it completely against traffic on a freeway in Queens, NY.

The Current State Of US Lane Splitting:

Lane splitting of any kind is currently illegal in NY. However, even if it was, this rider obviously has some kind of death wish. After this got crossposted in r/motorcycles, some commenters speculated that he was running from a traffic stop on an off-ramp, then decided to take off in the wrong direction.

Toward the very end of the video, at about 0:22, you can see another bike at the base of a ramp on the right side of the screen. It’s grainy, but you can see well enough to know that this second bike is also pointed the wrong way. It’s also significantly larger and more municipal-looking than the one that sped off in the wrong direction. The rider looks like they’re thinking about following, but then decides that today is not, in fact, a good day to die.

A 2015 analysis conducted by UC Berkeley’s Safe Transportation and Education Center found that lane splitting “is relatively safe if done in traffic moving at 50 mph or less, and if motorcyclists do not exceed the speed of other vehicles by more than 15 mph.” It went on to say that the greatest predictor of injury was the difference in speed between the motorcyclist and surrounding traffic, and not just a specific speed number by itself.

However, it doesn’t say a single thing about splitting in the wrong direction—probably because it’s one of those things we collectively assume that most people know they shouldn’t do. Don’t stick forks in electrical sockets. Don’t point the knife toward you when you’re opening boxes. Don’t race down a freeway against the flow of traffic, in or on any vehicle.