Reckless Rider Scrolls Through Phone With Cops On His Tail 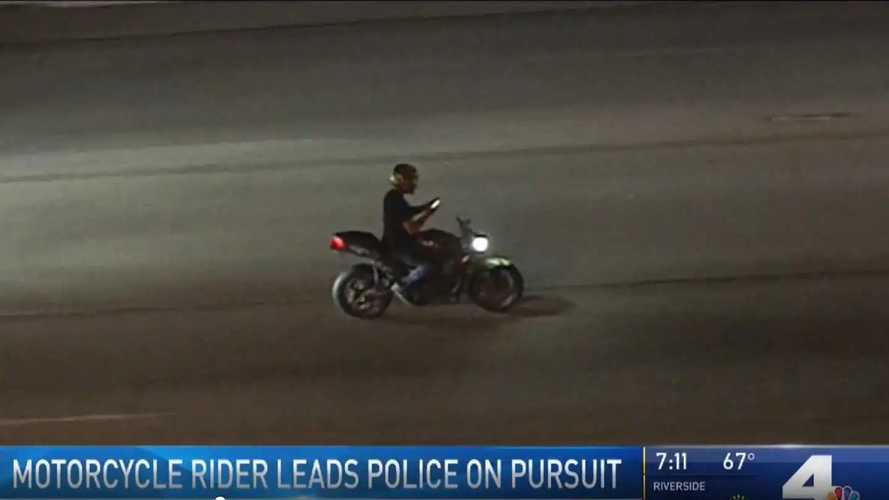 By now, most motorcyclists are painfully aware that distracted driving can seriously mess up your life. Many of us are extremely vigilant, and actively scan traffic around us to keep an eye on situations as they develop. See that guy with the cheeseburger in one hand, wiping his mouth on his sleeve? Then there’s that lady clipping her nails and not looking at the road. We’ve all seen behavior like this from car drivers—but what happens when it’s another rider?

On Sunday August 4, 2019, a lone rider on a CBR1000RR Repsol Replica hit a reported 120mph while speeding away from police, according to NBC Bay Area. That’s not the shocking part, though. What happened next is the bit that’s a little tougher to understand.

A news chopper was following the chase, and captured footage of the rider taking out his phone and scrolling through something while riding at that speed. Not just for a couple of seconds, but having a good, long look. Unless you’re doing stunts, most bikes aren’t usually hands-free devices.

It’s unclear from the footage if the rider was texting, looking at a map, or just checking for a good place to grab some food on Yelp. In any case, I’m not your parent, and I know you already know what a terrible idea this is,  so I’m not even going to write it. Still, I can’t help but wonder what this rider was thinking. Wouldn’t you at least be worried that you might drop your phone, if not actually about your own (or anyone else’s) safety?

Newschopper Bravo 4 was not able to obtain complete footage of the chase due to technical difficulties. However, NBC Bay Area later reported that the rider eventually lost the California Highway Patrol officers who gave chase. At the time, the rider was in the vicinity of Los Angeles International Airport.