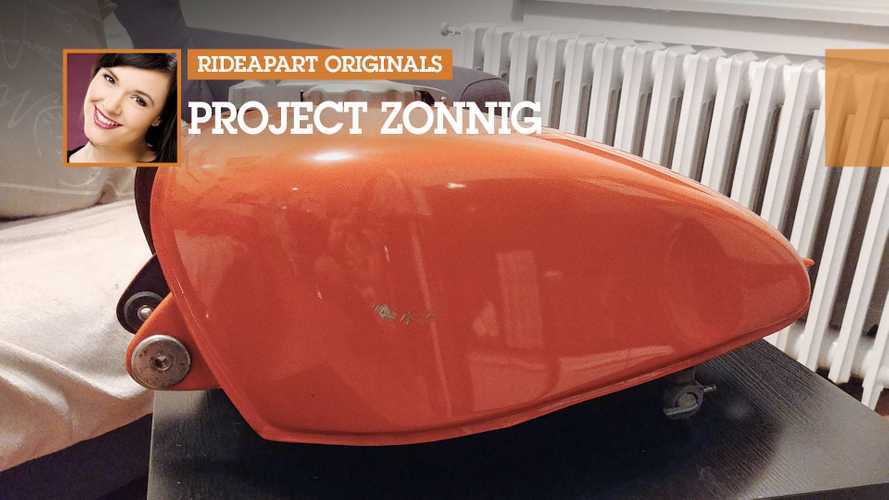 I give myself a month before my place is overwhelmed by motorcycle parts.

Motorcycles are often considered works of art. Think of all those countless galleries of “sexiest” and “best-looking” motorcycles out there—including on RideApart. A lot of thought goes into these designs so our appreciation of the end result is a proper celebration of that hard work. Until I bought the CX 500, I didn’t realize the term “work of art” could take a much more literal meaning.

Small Bike Rescue: The Thrill Of Victory And The Agony Of Defeat

How do you like my new conversation piece? I call it the Rusty Orange Void. It ties my living room together really well. The piece is by a little shop you’ve probably never heard of called Honda—it’s an original 1979 piece, a true vintage! According to the artist, it is a comment on mass production and our dependance to gasoline.

I wonder who would buy that whole pompous artist spiel. The truth is a lot less glamorous: the CX’s gas tank receiving its de-rusting treatment. It is currently sitting on my coffee table, filled with vinegar, slowly simmering to help rid the interior of all the superficial rust. It looks like a statue on a pedestal. Rusty Orange Void admittedly has a nice ring.

So as you might have noticed, I finally started working on Project Zonnig. On a Tuesday night, after a hard day’s work, I packed all my tools, my roll of shop towels, and my Clymer Manual in a duffle bag and headed over to my buddy’s where the motorcycle is stored. The perk of storing my motorcycle at a friend’s is that he granted me free access to his garage meaning I get to come and go as I please—a power I’ll do my best not to abuse.

Before finally breaking the tinkering ice, I spent a weekend forming an action plan in my head listing the tasks I wanted to tackle, the tools I would need, and the order in which I would start pulling this puppy apart. As expected, the plan went out the window the minute the garage door opened—I had clearly overthought this. I pretty much worked from the top down. The first thing I did was to remove the saddle. Contrarily to modern models that only require the key to flip the seat up, the saddle on the '79 CX 500 is bolted down. It took me longer than I’m willing to admit to figure that part out and that the keyhole I was twisting was what looks like a helmet lock (a theory that remains to be confirmed).

The tank followed. A peek inside confirmed that it was in dire need of a bit of love—the inside surface of the metal was covered in patches of superficial rust. The magic recipe to (hopefully) take care of that? Vinegar. While a number of YouTube videos suggested apple cider vinegar, I opted for white vinegar—a choice supported by Director Jason. So out went a gallon of old fuel and in went two gallons of white vinegar and a handful of pennies for luck (read: to help scrub the rust away). Put the lid on and shake shake shake.

This process takes a few days as you have to let the acidic solution do all the heavy lifting. So in the meantime, the tank is sitting in the middle of my living room. It's convenient because I get to give it a shake every so often, on my way to get coffee from the kitchen. Once the vinegar treatment is over, I will rinse the tank using distilled water containing diluted baking soda to neutralize the acidity. I’ll report back on the technique’s efficiency in a few more days.

This first round of hands-on work has taught me something else: as prepared as I think I am, I’ll always en up needing a tool or a part I don’t have. The realization hit me when I started removing the massive rack from the back of the bike. I don’t care how useful that rack is, it makes the bike look like a minivan and it has got to go. It turns out that two of the rack’s anchor points are bolted to the top of the rear shocks, which means the bolts are longer. My entry-level ½-inch socket didn’t fit—I will need to get a long one. This will require a second trip to the hardware store—two out of many more to come, I suspect.

On that same night, I also changed the spark plugs, removed the old battery and side panels, and changed the oil. Almost nothing came out of the pan when I removed the filter, hopefully only a pointer to some recent neglect and not a bad surprise I’ll discover further down the line.

A sad sight, but a necessary evil.

So now the little CX is sitting naked in the garage, looking a little sad without its bright orange bits. Next steps I have lined up are to remove the rack once and for all and tackle the carburetors in dire need of maintenance. A look at the cam chain tensioner is apparently also recommended. Looks like I’ll be graduating from the yellow to the purple room at the motorcycle maintenance kindergarten. I suspect that a month from now, I’ll be making fun of how excited I was after changing the spark plugs on my own like a big girl.