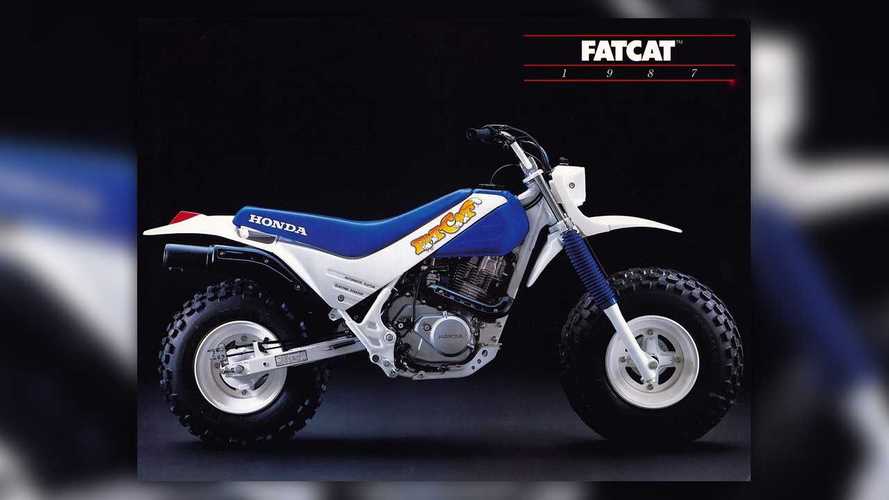 In a world of Big Wheels, be a Fat Cat.

Remember the Honda ATC? Of course you do. I reckon most of us who are of a certain age remember the small-displacement, big-tired, candy-colored trikes that poured out of Hamamatsu by the ton in the 70s and 80s. Growing up in rural central-Ohio they were everywhere. Well, everywhere but my garage because my old man was overprotective, not that I'm bitter or anything.

Anyway, if you remember the ATC you may remember that by the late-80s Honda was winding down production in the face of public backlash against the trikes' perceived danger and the increasing popularity of four-wheeled ATVs. Right before they completely axed the ATCs, though, Honda rolled out a strange little bike as a response to Yamaha's popular Big Wheel that was both dirt bike and ATC but not entirely either. Friends, let me introduce you to the TR200.

Who but Honda could have built the Fatcat, and who could resist it? Yamaha, the answer is Yamaha.

Just look at it! It's good, right? Produced for just two years—1986 and 1987—the TR200 is essentially an ATC200X with one of the rear wheels lopped off. It was powered by a detuned version of the ATC200X's 198cc air-cooled, four-stroke single which delivered power to the fat rear wheel through a five-speed gearbox with an automatic clutch. It had standard forks up front, a monoshock aft, and cable-operated drum brakes on both wheels. The suspension was padded out by the big, pillowy off-road tires from the ATC line, and it was apparently a boss in sand and mud.

Honda marketed the TR200 as a gateway machine to dirt bikes and ATVs, and touted its simplicity and friendliness. Along with the automatic clutch, the little bike was equipped with an electric starter with a kickstart backup for ease of operation. It had no gauges, a requisite 80s-era square headlight, and every TR200 made came in two-tone Shasta White with blue highlights with an extremly adorable "Fat Cat" sticker package. The entire package weighed just over 250 pounds dry and ran $1,498 Yankee dollars (roughly $3,500 in today's dollars).

I couldn't find any solid production numbers for the TR200, but I don't think Honda made too many of them. Rushed to market to compete in a market already dominated by Team Blue, the Fat Cat never really found its niche and was dead before 1988. You can still find pristine examples of these adorable little scamps here and there on the internet, and for not a lot of money. Problem is, they're still competing with Yamaha after all these years since there are tons of its old nemesis, the BW200, on the used market and the TW200 is still A Thing. I still kinda want one, though, if only to own a bike that hardly anyone has heard of.

If you'd like to know more, our colleagues at Dirt Bike did a killer shootout between the Fat Cat and the BW200 way back in 1986. You can read that article here and draw your own conclusions.