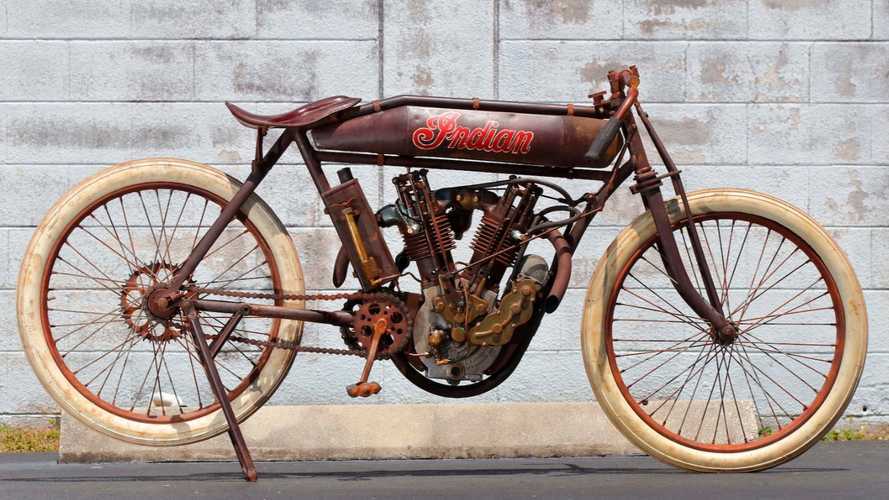 Back in the day, this bike absolutely smoked every other race bike around.

Motorcycle racing in the early 1900s was wild. At the time, it was a brave new world, as any technologies we now take for granted were in their infancy and intrepid manufacturers that wanted to go racing had to adapt. Take this beautiful barn-find 1914 Indian 8-Valve Board Tracker as an incredibly good example—and if you really want to take it, read on to learn how it can be yours for the right price.

Even if you never go near any sort of track, engines heat up as they run, especially if you put them under pressure to go faster and faster. Indian’s development of the 8-valve solution came as a response to previous exhaust valve failure in Indian V-twins due to overheating, according to Silodrome. Making it into a 4-valve-per-cylinder design extracted heat quickly enough that this crisis was averted, so your entire engine didn’t self-destruct. This 1914 Indian 8-Valve Board Tracker was capable of speeds up to 120mph, which is both phenomenal and bonkers to think about—especially when you think about those brakes.

This bike was originally imported into Uruguay by a racer named Lucchese. He unfortunately found that he couldn’t race it in any local competitions because it outclassed everything there at the time. It was an amazing machine in its day—maybe a little too amazing for everything else on two wheels. Lucchese did some exhibition racing with it for several years, until some time in the 1930s when he stored it away in a garage.

If you’re interested, this old racer hits Mecum’s Monterey auction block on Saturday, August 17, 2019. There’s no reserve, and the current estimate it’s expected to fetch is anywhere from $75,000 to $85,000 USD. Paint is at least 70-percent original, according to the current owner. He didn’t want to lose that amazing patina, and so he only restored what was absolutely necessary to get it running and rideable.

Board tracks don’t exist anymore, but this amazing piece of motorcycle history certainly does. Check out full auction details and more photos at Mecum.