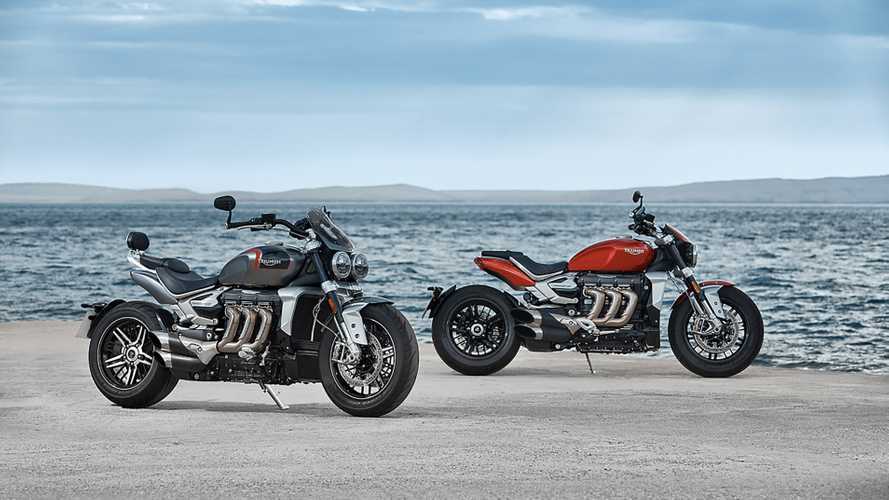 Hello Rocket 3, we’ve been expecting you. Oh, you brought a friend!

After months of anticipation, we finally get to lay eyes on the production version of the Rocket 3. We knew it was coming and had already had a taste of it back in January when the company released the limited-edition Rocket 3 TFC. This time, we’re getting the version that’s here to stay and won’t run out after a few hundred units. Not only that: we’re getting not one but two versions of the model!

We've Been Waiting For You:

How right were we in our speculation about the Rocket 3? Let’s have a closer look. Triumph confirms the two new Rockets are both equipped with the same 2.5L (2,458cc) three-cylinder engine rated at 164.7 horsepower and a ginormous 163 lb-ft of torque. We got the engine right, which was easy to figure out considering the mill unveiled in the TFC. Earlier reports suggested the new model was going to produce over 170 hp, so we missed that one by a few hp.

As for the weight, the new Rocket 3 are built on an entirely new aluminum chassis complete with cast and forged lightweight components which allowed this new generation to shed close to 90 lb. Some sources had suggested the new model would lose 100 so, again, we were close but we missed the mark.

The new generation also features an adjustable Showa fork up front and a shock at the back, also adjustable. Stopping power is provided by a set of Brembo Stylema brakes. The most striking upgrade over the previous Rocket, however, is the new exhaust system design, a three-into-two monster unit. And of course, the look of the bike received a well-deserved upgrade—we’re all in agreement in the RA office that it looks so much better.

The new 2020 Rocket 3 will be offered in an R and a GT version. Both models will be underlined by the exact same engine. The Rocket 3 R is a pure breed muscle roadster that offers a more “engaging” and forward riding geometry—the entry-level into the lineup if you will. The R is the Rocket 3 in its purest form. The GT adds a few comforts including a longer handlebar and forward footpegs that offer the rider a more laid back position, as well as a backrest for the passenger.

Both models will be available as of November and pricing has yet to be announced.