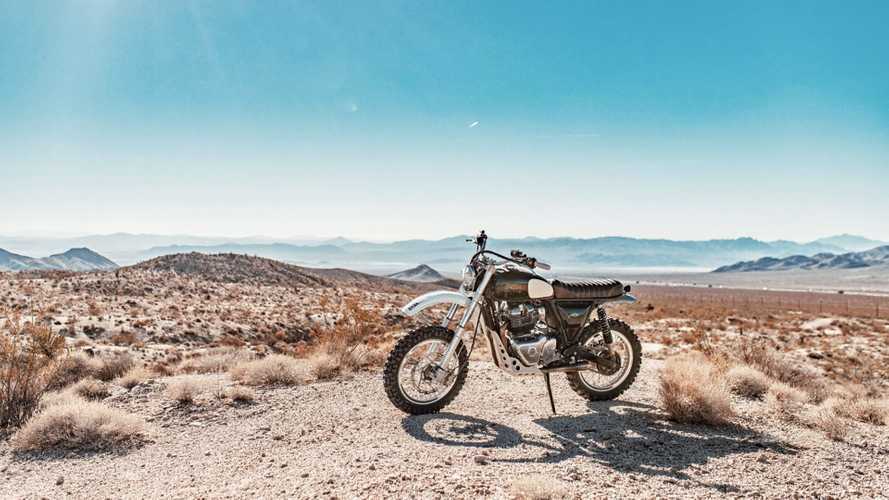 A scrambler we'd actually take out in the desert.

Royal Enfield opted for a standard and café racer look with the design of its new Continental GT 650 and INT 650. That didn’t keep a number of custom shops to turn either of the Twins into the single retro style the company hasn’t properly touched on yet: the scrambler. Some versions resulted in scramblers in name but not in purpose. This isn’t the case with Revival Cycles’ design. This Interceptor-based scrambler goes way beyond the simple aesthetic. We would totally take it out on the trails and we’re pretty sure it would be a hoot.

Interestingly, the guys at Revival Cycles got their hands on the Royal Enfield INT 650 before it was actually shown to the world. How cool is that? This custom creation had to be worked on in the utmost secret. The team opted for the McQueen-era scrambler with the intention to enter the bike in the LA/Barstow/Vegas Dual Sport Ride—see what wee mean by legit off-roader?

The stock forks were swapped for a suspension taken off a Suzuki DR-Z while a set of jacked up shocks were fitted at the back. This set up provided the bike with a massive 8 inches of travel. The new suspension required a different chain roller and spring-loaded arm to accommodate the longer travel. The wheels were replaced with a set of 18-inch spoke rims wrapped in knobby tires. The shop built a custom short exhaust and added a skidplate.

The frame of the bike was shorten at the back and the rear loop received a trim. The shop’s custom leather division, Revival Limited, prepared a tuck and roll saddle for the bike for a proper scrambler look. A custom aluminum fender was machined and added at the front and voilà. The bike was put through its paces on the LAB2V race’s 400 miles of rugged terrain. The bike named Desert Runner was so successful in its endeavor that the shop decided to offer a customers a chance to buy their own. The custom job will cost you between $25k and $30k—brand-new Royal Enfield INT 650 included.